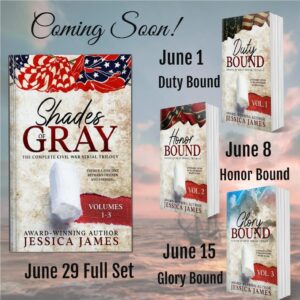 I’m so excited to announce that the new Shades of Gray Civil War Serial Trilogy will be released this June!

First released in 2008, Shades of Gray was so popular that I decided to use the “year that was Covid” to re-write and expand the book into three volumes. There are lots of new chapters and even some new characters!

The Release schedule is:

The Shades of Gray Civil War Serial Trilogy consists of three books: Duty Bound, Honor Bound, and Glory Bound, as well as an Epilogue that you can request for free.

Honor Bound: This volume follows Union Spy Andrea Evans as she finds herself recuperating from an injury in the home of her enemy, Colonel Alexander Hunter. Readers will discover the fine line between friends and enemies when the lives of these two tenacious foes cross by the fates of war and their destinies become entwined forever.

Glory Bound: The series culminates in this emotional final volume that reflects the sacrifices of both sides and proves there can be no bond stronger than that which unites enemies. Immortal love, whence it flows, can never die.

Some review quotes from the original Shades of Gray:

“My house is a mess, my sink is piled high with dishes and my husband ate watermelon for dinner because I could not put down Shades of Gray. Could. Not. Put. Down. Honestly, this book completely captivated me and left me emotionally drained. I loved it!!!”

“Wonderful, fabulous book! I seldom reflect back on a book, but this one has haunted me since I finished it at 2 a.m.”

“Lost a lot of sleeping reading this one. Too good to put down! Made me laugh. Made me cry. Awesome book!”

“I loved this novel. Still crying, but I laughed just as much as I cried.”

“If someone said I could only ever have one book for the rest of my life either of these [Shades of Gray or Noble Cause] would be my pick. Thank you.”

“I can’t remember having such a heavy heart and crying so much since reading Gone with the Wind. Thank you!”

“Loved. Loved. Needs to be made into a movie.”

“I’m not usually one for Civil War era books, but I’ve got to say you really got me on this one. I LOVE it!”

“I was completely lost and spellbound by the realistic story. With­out hesitation I must say it now ranks equally with Gone With The Wind.”