This is the third installment of my Civil War love letter series during Valentine’s Day week.

Over the years, the persona of Stonewall Jackson has attained almost mythical proportions. In life, they say he was almost impossible to know. In death, he became even more of an enigma because he was such a legendary leader.

Anyone who has read anything about this mysterious, brave, bold, respected and feared commander will find these tenderhearted love letters incredible. 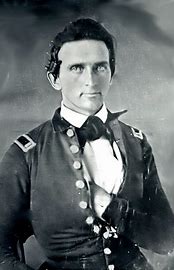 The following letters and reminiscences are taking from the book, Life and Letters of Stonewall Jackson, which was written by his wife, Mary Anna Jackson.

Sept. 25, 1862
Darling, my heart turns to you with a love so great that pain flows in its wake. You cannot understand this, my beautiful, bright-eyed, sunny-hearted princess. Your face is the sweetest face in all the world, mirroring, as it does, all that is pure and unselfish, and I must not cast a shadow over it by the fears that come to me, in spite of myself. No, a soldier should not know fear of any kind. I must fight and plan and hope, and you must pray.
Pray for a realization of all our beautiful dreams, sitting beside our own hearthstone in our own home—you and I, you my goddess of devotion, and I your devoted slave. May God in his mercy spare my life and make it worthy of you!…
Your soldier
And here is an excerpt from another letter, written three months before the well known Battle of the Wilderness. In it he tells of denying a furlough to one of his men, while setting an example by staying at his post of duty—despite the hardships.

In answer to the prayers of God’s people, I trust He will soon give us peace. I haven’t seen my wife for nearly a year—my home in nearly two years, and have never seen our darling little daughter; but it is important that I, and those at headquarters, should set an example of remaining at the post of duty.
According to his wife, Jackson did finally get to see is daughter when she was five months old.
It was raining and he was afraid to take her in his arms with his wet overcoat, but upon arrival at the house, he speedily divested himself of his overcoat, and, taking his baby in his arms, he caressed her with the tenderest affection, and held her long and lovingly. During the whole of this short visit, when he was with us, he rarely had her out of his arms, waking her, and amusing her in every way that he could think of—sometimes holding her up before a mirror and saying, admiringly, “Now, Miss Jackson, look at yourself.”
Then he would turn to an old lady of the family and say, “Isn’t she a little gem?” When she slept in the day, he would often kneel over her cradle, and gaze upon her little face with the most rapt admiration, and he said he felt almost as if she were an angel in her innocence and purity.
For those who are not aware, Jackson was accidentally shot by his own troops at the Wilderness on May 2, 1863. He lost his left arm, but it was thought that he would recover. However he died of complications eight days later, most likely from pneumonia.
The letter can also be found in my book From the Heart: Loves Stories and Letters from the Civil War.