As many of you know, Fall is my favorite time of year. So when the Virginia Piedmont Heritage Area (formerly the Mosby Heritage Area), scheduled a trail ride near Upperville, I had to go.

The drive down to Virginia was spectacular, with the sun rising over frost-covered fields. If you’ve never visited Fauquier or western Loudoun counties, it is like being transported back in time. Stately homes, stone fences, and rolling hills provide a beautiful backdrop for a trail ride, but even more so when their is a nip in the air and the leaves are changing. 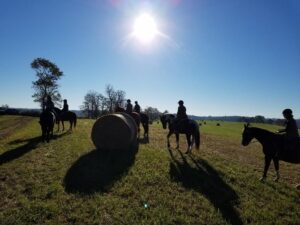 The ride started on Blue Ridge Farm, located near Upperville, Va., and included views of “The Brick House” at Oak Spring Farm, one of the homes of the legendary preservationists Paul and Bunny Mellon. Bunny was an avid gardener who became the designer of the White House Rose Garden after becoming friends with Jacqueline Kennedy. (Quite an interesting person!)

I couldn’t help but think of Mosby and his men as we rode over the same rolling hills that they used to call home. The scenery was breathtaking and the historical stops along the way were fascinating. 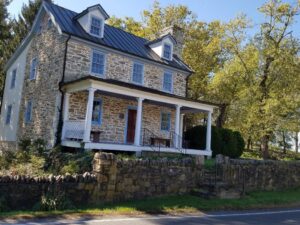 I stopped at the Rector House on my way home, which is where Mosby officially formed the 43rd Virginia Cavalry on June 10, 1863.

J.E.B. Stuart also called this house his headquarters during the Gettysburg Campaign, and it served as a hospital for wounded Union cavalrymen in the winter of 1864.

Fittingly enough, it is now the home of the Piedmont Heritage Association.

There is so much history in this area. I’m so glad I got to see a slice of it from horseback.