Lacewood Wins Trio of Awards in 2020 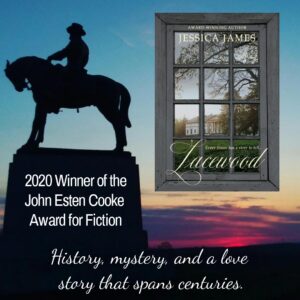 GETTYSBURG, PA: Author Jessica James received the 2020 John Esten Cooke Award for Southern Fiction for her 2019 novel Lacewood. The award, which comes with a $1,000 prize, is named after the Civil War-era novelist John Esten Cooke and is awarded by the Military Order of the Stars and Bars.

James also won the award for her novels, The Lion of the South, Above and Beyond, and Noble Cause.

John Esten Cooke was a prolific nineteenth century novelist who penned historical adventures and romances in the tradition of Sir Walter Scott and James Fenimore Cooper. Other winners of the Cooke award include New York Times bestselling authors Donald McCaig for Jacob’s Ladder, Robert Macomber for Point of Honor, and Newt Gingrich for Grant Comes East.

James was also a Finalist in the Greater Detroit RWA Bookseller’s Best contest and the HOLT Medallion contest (Honoring Outstanding Literary Talent), given by the Virginia chapter of the Romance Writers of America.

Lacewood is about a disillusioned socialite and a wounded special operations veteran who join together to save a neglected house while healing themselves. During the restoration, secrets are divulged, riddles are unraveled, and age-old mysteries are solved, as the house reveals a long-forgotten love story.

James has a new suspense novel set for release Aug. 4, 2020. Presidential Advantage revolves around an unsuspecting First Lady who must rely on a Secret Service agent to discover who can be trusted—and who will do anything to keep control.

For more information on the author or her books, visit www.jessicajamesbooks.com.