Hello everyone! Here is Part II from my “History on Horseback” ride in Mosby Country which was sponsored by the Mosby Heritage Area Association. This post focuses on the Revolutionary War hero and double agent John Champe.

Champe isn’t a name often heard in other parts of the country, but he is quite famous in Loudoun County, Va., where he lived. He was born about 1752 near what is now Aldie, and became a sergeant major in “Lee’s Legion,” a unit commanded by Henry Lee III (later known as Colonel “Light-Horse Harry” Lee), who was the father of General Robert E. Lee. 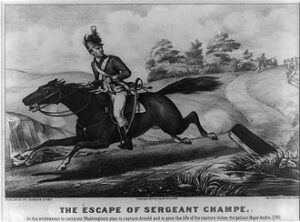 When a plan was formulated to kidnap the defecting General Benedict Arnold and bring him back to American lines, Champe was handpicked by George Washington and Lee for the spy mission. The only problem was, Champe had to pretend to “defect” to the British side so that no one would figure out the plan. It is said that when Champe accepted the assignment, he was undeterred by the dangers and difficulties of the mission but was bothered “by the ignominy of desertion, to be followed by the hypocrisy of enlisting with the enemy.”

Champe raced out of the American camp and successfully made it to the British lines, despite being chased by an American patrol who knew nothing of the plan. He was introduced to Arnold and soon gathered intelligence that established that there were no other American generals involved with Arnold (one of his assignments). He then formulated a plot to capture Arnold on his regular evening stroll, but on the very night he planned to act, the entire British unit left and the whole endeavor had to be called off. 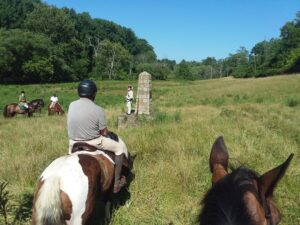 After the failed attempt, Champe served in the British army for many months before finding a way to escape back to the Continental Army. Upon rejoining the Americans, Champe voiced a desire to continue his service fighting the British, but Lee dissuaded him from it — pointing out that if captured, he could now be hanged as a spy. He was  discharged honorably from the Continental Army.

During the trail ride, we rode out to a field where a stone monument marks the site of John Champe’s home. The local high school now bears his name, but it’s sad that the home place of this American hero is no longer standing. 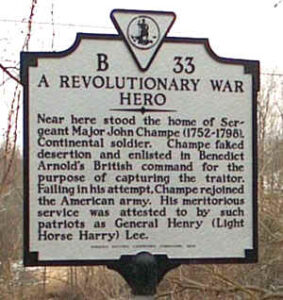 I was so glad I got to catch a glimpse of a small bit of our country’s past! May we never forget what these brave men and women did for us.