Looking back at the history of pandemics 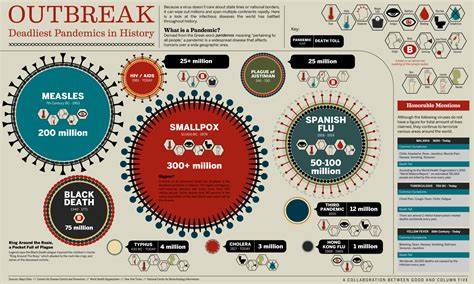 Although the current pandemic is frightening and unnerving, COVID-19 certainly isn’t the first of its kind—and it most definitely is not the worst of its kind.

You have to travel way back in time to find the first known pandemic, which occurred in Athens from 430 to 426 BC, and killed a quarter of the Athenian troops during the Peloponnesian War. Though the cause of the disease was unknown for centuries, in 2006 researchers analyzed teeth from a mass grave and confirmed the presence of a bacteria related to typhoid fever.

Jumping to the 1300s, the Black Death killed 75 million people across the globe, including 20 to 30 million Europeans—one third of its population—in six years. There were more than 100 plagues in Europe, with this infection recurring in England every two to five years. The Great Plague of London (1665-66) killed 100,000 people in that city alone.

In 1885 another plague pandemic started in China and spread to India, killing 10 million people. It was during this pandemic that the United States saw its first outbreak—the San Francisco plague of 1900-1904.

During the 1800s, there were seven cholera pandemics worldwide. The first started in India, and eventually spread to China. It hit Russia hard, with over one million deaths there from 1846 to 1860. In 1866, a cholera outbreak in North America killed approximately 50,000 Americans. An estimated two to six Americans died per day during the outbreak.

The famous Spanish flu began in 1918 and lasted until 1920, infecting 500 million people around the world. Most flu outbreaks attack the elderly or very young, but the Spanish flu attacked young adults, killing more people in just 25 weeks than AIDS did in its first 25 years.

If you look up pandemics, you’ll find these are just a few of the many that have swept across the world, wreaking the same type of havoc that we’re seeing today. Missing from this brief record are other well known diseases like smallpox (which killed 300 million), and measles (killed 200 million). Others include yellow fever, scarlet fever, diphtheria, Ebola, MERS, SARS, mumps, and Rubella.

So even though it feels like we’re facing something that has never happened before, the world and this country have actually survived much worse. We’re lucky to live in a time when medicines can be developed and manufactured at such a fast pace, and that we have the means to figure out how the infection is spread.

Hopefully more and more people will understand the importance of hand-washing ALL the time—not just during a pandemic. That will certainly help during our regular flu season, which by the way, sickened 19 million Americans in 2019-2020 and killed more than 10,000 as of February.