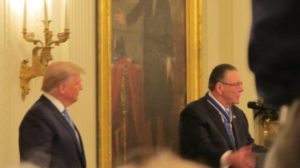 President Donald Trump awards the Presidential Medal of Freedom to General Jack Keane in the East Room of the White House.

It was a great privilege and honor for me to attend the ceremony for General Jack Keane when he was presented with the Medal of Freedom by President Donald Trump on March 10 in the beautiful East Room of the White House.

Calling General Keane a “courageous warrior and fearless patriot,” President Trump pointed out Keane’s exemplary service in Vietnam, where he was awarded a Silver Star for unflinching courage under fire. Keane continued his service by helping to oversee additional military operations in Iraq and Afghanistan.

During his acceptance speech, General Keane noted that the Vietnam War changed his life. It was there that he truly learned the value of life…to treasure it, to protect it. He ended by thanking the president for his commitment to rebuilding the military. “What you are doing to dig us out of the deep hole that you found the military in is all about protecting America, not just for today, but for the generations to come,” Keane said. 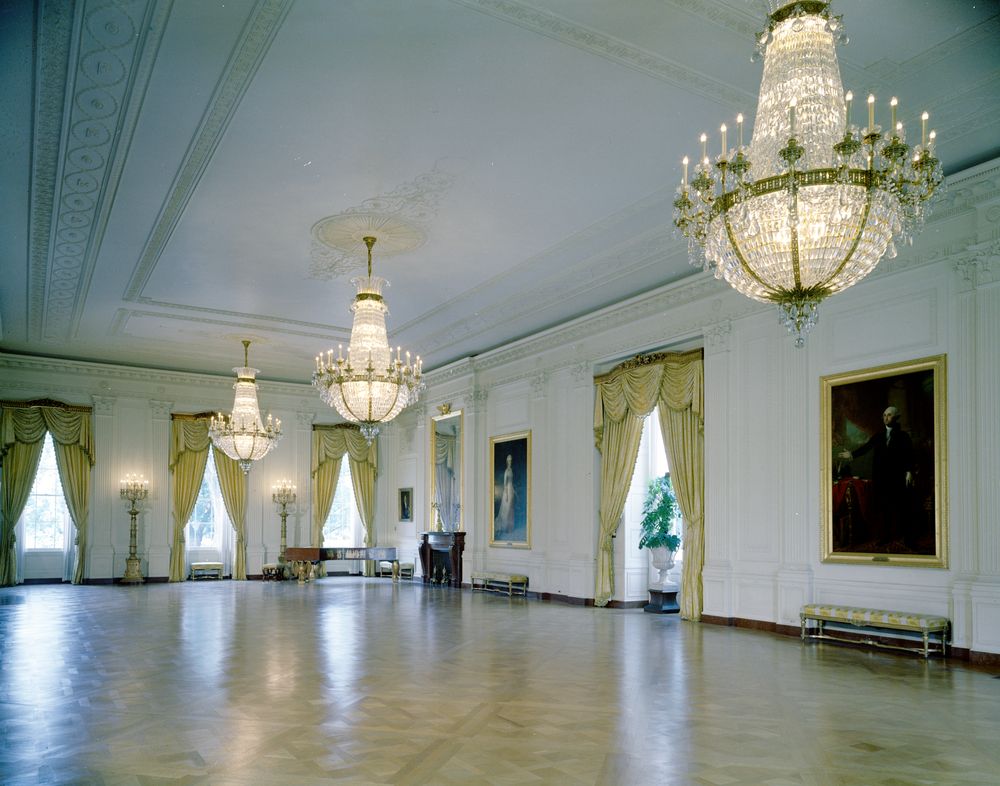 The historic East Room of the White House.

I have always wanted to attend an event in the  East Room of the White House. Its history is rich — both in large celebratory events and solemn national occasions. President Abraham Lincoln lay in state in this room, as did John F. Kennedy.

It’s reported that in April of 1865 after Lincoln’s death, mourners lined up outside White House, many having to wait more than six hours to pay their respects. About 25,000 walked through the South Portico into the entry hall and the Green Room before entering the East Room, which had been darkened for the occasion. The mirrors in the room were covered — as they were for other funerals held there — and the frames swathed in black crepe.

According to the book Washington in Lincoln’s Time: 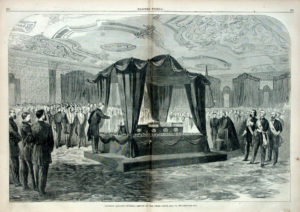 “The great room was draped with crape and black cloth, relieved only here and there by white flowers and green leaves. The catafalque upon which the casket lay was about fifteen feet high and covered with a domed canopy of black cloth, supported by four pillars.”

From the time the body had been made ready for burial until the last services in the house, it was watched night and day by a guard of honor, which was a common tradition in Victorian days.

I found a reference to another historic event that occurred in the East Room — one that is much happier and celebratory. On February 5, 1862, Mary Lincoln organized a major ball there, followed by a late dinner in the State Dining Room. She had invited 500 representatives of Washington society to show off the redecorated White House and her own new dress.

According to reports at the time, “the East Room was filled with well-dressed guests, looking very beautiful and the supper was magnificent. Guests came from congressional, military and diplomatic circles and were admitted only with their invitations in hand. The food came from New York and included images of the war constructed from sugar as well as a large buffet of meats and other delicacies. Dinner didn’t start until after midnight and didn’t end until almost dawn.” 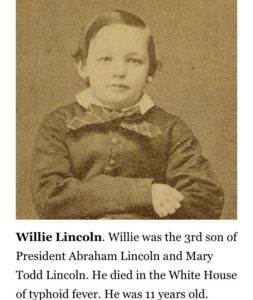 Although it was a temporary social success for Mrs. Lincoln, the dinner was the beginning of a personal disaster for her. Her youngest sons lay sick with fevers upstairs. One of them, Willie, was to die on February 20 from this illness.

This is what poet Nathaniel Parker Willis wrote of Willie’s funeral in the East Room:

‘The funeral was very touching. Of the entertainments in the East Room the boy had been a most life-giving variation. With his bright face, and his apt greetings and replies, he was remembered in every part of that crimson-curtained hall, built only for pleasure–of all the crowds, each night, certainly the one least likely to be death’s first mark. He was his father’s favorite. They were intimates –- often seen hand in hand. And there sat the man, with a burden on his brain at which the world marvels -– bent now with the load at both heart and brain–staggering under a blow like the taking from him of his child! His men of power sat around him -– McClellan, with a moist eye when he bowed to the prayer, as I could see from where I stood; and Chase and Seward, with their austere features at work; and senators, and ambassadors, and soldiers, all struggling with their tears –- great hearts sorrowing with the President as a stricken man and a brother. That God may give him strength for all his burdens is, I am sure, at present the prayer of a nation.”

As I watched the ceremony for General Keane, this is what I was thinking of…all the history that room has seen. The happiness and the tears. The celebrations and the joy. The sad goodbyes and pain. If only those walls could  talk.

I hope each and every one of you gets a chance to visit the White House someday. The East Room is part of the public tour. You get tickets by contacting your congressman and filling out a form.