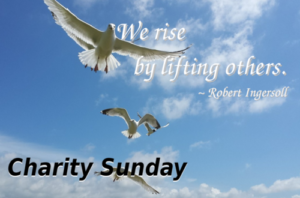 The charity I am featuring is Code of Vets, an outstanding grassroots organization that has grown with the help of social media and the fiery veteran who leads it, Gretchen Smith.

The way this works is: For each comment I receive on this post, between now and Oct. 1, I will donate one dollar to Code of Vets. If you’re here, reading this – please take a minute or two to comment. It doesn’t cost you a penny to do a bit of good for the world. (But you might also want to visit the Code of Vets website and read about the wonderful work that they do or purchase some patriotic merchandise). 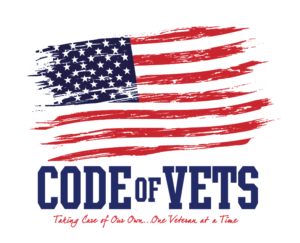 With just a Twitter account and a nothing-will-stop-me attitude, Air Force veteran Gretchen Smith launched Code of Vets, a grassroots organization that operates with the motto “Taking care of our own—One veteran at a time.”

Code of Vets relies on social media to help spread the word about veterans who have fallen between the cracks and need immediate help. Whether a veteran needs a ride to the hospital—or a new place to live—Smith puts the word out and gets the job done. Code of Vets is always ready to provide immediate intervention for veterans in crises, at risk, or in need.

Just as importantly, Code of Vets strives to bring awareness to the daily struggles and issues of the veteran community. The need is critical considering that there are approximately 40,000 homeless veterans on any given night, and that a veteran commits suicide roughly every 70 minutes. (Think about that)!

In the past year alone the number of diagnosed PTSD cases in the military jumped 50 percent (this is only the reported and diagnosed cases). Transitioning from military to civilian life is often overwhelming and stressful. Transferring military job skills, training and education is a common problem for veterans.

Gretchen is determined and focused on her mission, and takes each case to heart. The inspiration for the organization comes from her own father, Sgt. Danny E. Smiley. A Bronze Star Medal recipient and 100 percent disabled Vietnam veteran exposed to agent orange, Sgt. Smiley lost his battle with PTSD at the age of 57.

I touch on the topic of PTSD in the novel Lacewood with the hope that readers will gain a little understand of the depth and complexity of the obstacles faced by our veterans. Part of the rules for taking part in this book blog hop is posting a book excerpt, so here it is…

Blurb: Two people trying to escape their pasts find a connection through an old house—and fulfill a destiny through the secrets it shares. Part love story, part ghost story, Lacewood is a timeless novel about trusting in fate, letting go of the past, and believing in things that can’t be seen.

A new onslaught of rain began, pelting the windows with horizontal gusts that continued to gain in force as the storm descended on Lacewood with all its fury. Katie felt her way down the stairs in the darkness, opening her eyes wider when she thought she heard another bang coming from inside the house.

Just a few moments later, a hand reached out of the darkness and grabbed her around the waist. Katie was too frightened to even scream.

The miracle of hearing Will’s voice caused Katie to lose the last shreds of her self-control. She threw herself into his protective arms and sobbed. “What is happening?” Thunder cracked as if it were in the same room with them, requiring Katie to yell to be heard above the havoc.

“Stay down.” Will took a few deep breaths and repeated the words as he pulled her down against him and sat on the steps. “Stay down, man.”

The security of his embrace made her glad he held on tight. But after a few minutes she began to understand why. He was breathing hard. Shaking. The sound of the storm made it difficult to talk, but there was more to it than that.

He was soaked with both sweat and rain—and his voice quaked. His heart pulsed against her cheek in a wild rhythm that told her he was fighting something she couldn’t see. The sound of the storm—or perhaps the utter chaos—had opened a wound inside him.

The man who was usually a mountain of strength was being torn apart.

Katie wanted to comfort him, but she didn’t know what to do or say. Her father had moments like this. Thunder, or even backfiring cars ignited memories that left him dazed and unreachable—sometimes completely unapproachable for days.

Everything about Will was beginning to make more sense now. He’d been in the military…lost a close friend. Perhaps that was why his instinct now was to push everyone away…not get too close.

“It’s okay, Will.” She rubbed his arm to comfort him, wanting to hold him for as long as it took for his heart rate to ease. “It’s only a storm.”

He repeated her words over and over, as if he might lose them while the tempest continued to vent its wrath. Breaths came in great spasms, and his arms trembled as he held her.

For a few long minutes no reassurance seemed good enough. Katie tightened her embrace, and Will returned the gesture, holding her so tightly she could barely breathe.

She wanted to tell him she understood but was afraid that would be too bold. How could she possibly understand what he was going through? The storm had kindled something beyond her experience or understanding.

Anyway, they were practically strangers—bonded together by this house…and now perhaps by the fact they both had deep wounds that still bled freely.

Will pulled away slightly as the storm’s fury began to diminish. Katie glanced up at him just as lightening flickered through the window and glimpsed an unspoken pain alive and glowing in his eyes. Agonizing thoughts—or memories—darkened his countenance as he trained his gaze on the wall, trying to regain his composure.

“I’m sorry.” His expression was vacant, as if he didn’t know exactly where he was or how he’d gotten here.

Katie pretended her own fear had been too great to notice his. She knew the military culture was one of toughness, that he wouldn’t want her to see any sign of weakness.

“For what? Scaring me to death when you grabbed me?” She forced a laugh.

“The thunder.” He put both hands to his head and covered his eyes as if to stop the images still assailing him. His whole demeanor spoke of a grief and anguish he was powerless to banish.

“Sometimes I can’t stop the movie playing in my mind.”

If you believe that veterans deserve a helping hand and the opportunity to be lifted up — don’t forget to leave a comment and visit Code of Vets. (I’m hoping for lots of comments, but have to state a limit at 200).

Update: I received 80-something comments and donated a straight $100 to Code of Vets. Thanks to everyone who took the time to comment!