Remember the sacrifice on Poppy Day 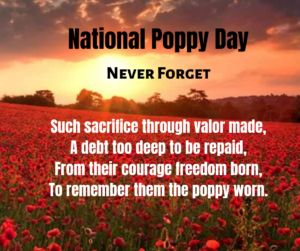 National Poppy Day may not be one everyone knows about, but the symbolism behind the red flower goes back many years.

From the battlefields of World War I, weary soldiers brought home the memory of a stark landscape transformed by wild poppies, red as the blood that soaked the soil. Through this miracle of nature, it seemed that the spirit of their comrades lived on, making the poppy a symbol of the sacrifice of lives in war — and the hope that they had not died in vain.

People worldwide now wear the poppy as a way to honor living veterans and those who lost their lives. The custom can be traced back to 1918 when Moina Michael popularized the idea of wearing a poppy flower in memory of the lives lost in WWI. She drew inspiration from the poem “In Flanders Fields,” written by WWI Col. John McCrae.

The American Legion asked Congress to designate the Friday before Memorial Day as National Poppy Day, so hopefully it will continue to serve as a reminder of the cost of freedom.

As we enjoy this weekend with family and friends, let’s not forget the sacrifice of those who gave all for the liberties we sometimes take for granted.

Enjoy the weekend and #NationalPoppyDay!