Memorial Day Flags: A tribute to soldiers past and present

I hope you are all having a wonderful holiday weekend with family and friends! 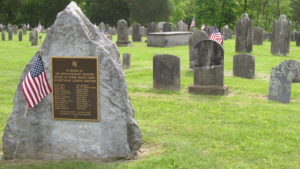 A marker at Lower Marsh Creek Church Cemetery inscribed with the names of the Revolutionary War soldiers buried there.

There is so much emotion behind this holiday for me, I cannot possibly put it into words. In a way, it brings together the past and the present as we honor those who have fallen in all wars — from the Revolution through today.

I have had the honor for the past 10 years to place flags on the graves of soldiers at Evergreen Cemetery in Gettysburg (the famous Cemetery Hill). This year I did one of the “old” sections, as well as the newer World War II section that grows larger each year.

What a national treasure we are losing as members of the Greatest Generation pass away. Don’t forget to shake the hands of the veterans you see and thank them for their service. 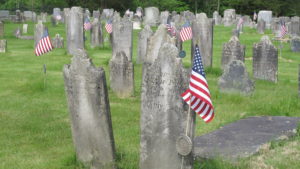 A few of the Revolutionary War veterans buried at Lower Marsh Creek Church.

This year, I also had the honor of taking over the duties of placing Memorial Day flags at Lower Marsh Creek Cemetery outside of Gettysburg. The majority of the fallen who rest there are from the Revolutionary War, but there are about two dozen Civil War soldiers as well. Other veterans represented are from the War of 1812, Korea, Vietnam, and World War II.

It is a beautiful resting place for those who served from our country’s very beginning. Placing the flags gives me time to reflect on the sacrifice, and to honor their memory in a small way.

And that’s what it’s all about, I guess. Those who served and those who died fulfilling a sacred duty should never be forgotten. These heroes gave up their own dreams so that we could fulfill ours.

Have fun celebrating the kick-off for the summer season, but don’t forget the reason for this holiday or the sacrifices that allow us to enjoy such abundant freedoms. 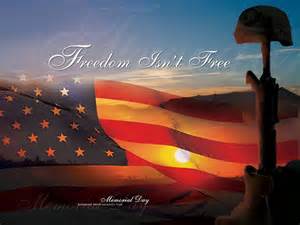