A visit to the historic White House 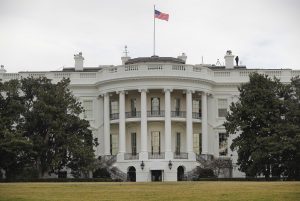 Where better to spend Veterans Day weekend than in our nation’s capital? There is so much to do and see — museums, art galleries, and historic tours all within a few blocks. I’ve done a little sight-seeing in DC over the years, but this time I made arrangements to visit the most historic building of all — the White House.

The trip does take a little planning. You have to apply for a tour through your congressman’s office so they can do a background check. Then they give you a date and a time to arrive. And then, you spend an hour or so going through security. 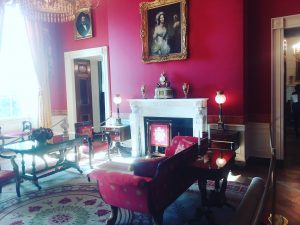 Fortunately, it is worth every minute of the wait. I have toured historic homes all over the country, and never realized what a magnificent testament to time the White House is! Of course, the structure itself is the oldest public building in the District of Columbia, so the architecture is beautiful. But the heirlooms and mementos from former presidents are just as noteworthy. Every president, except for Washington (because it was still being built), has conducted the government of our nation there.

Here are a few examples of what the public is allowed to view:

John Adams used the Red Room (photo) as a breakfast room. Rutherford B. Hayes took the oath of office in this room in 1877, and it is now often used by First Ladies for small receptions. An 18th century French musical clock sits on the mantel.

The Blue Room features furniture purchased by James Monroe after the fire of 1814. Seven French chairs and a sofa are in the room. Portraits include John Adams, Thomas Jefferson, James Monroe, and John Tyler. The Hannibal clock on the mantel was acquired in 1817. 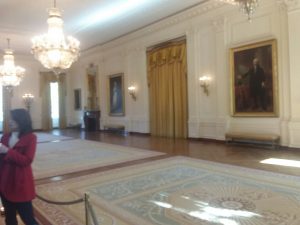 In the Green Room, the coffee urn was owned by John Adams, and the French candlesticks were used by James Madison. Can you imagine?

The most beautiful (and large) room is called the East Room, which you may have seen on the news since it is used for receptions and press conferences. It is the largest room in the White House, and features elaborate glass chandeliers that date from 1902. The room has four fireplaces, and has been used for several weddings, including Nellie Grant, Alice Roosevelt, and Lynda Bird Johnson.

The picture does not do this room justice. It was too big to get it all in. 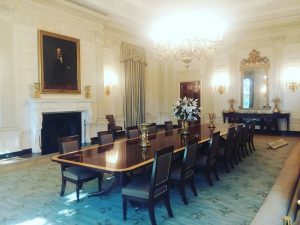 The State Dining Room was also impressive. It can seat 130 guests, and the painted English oak paneling dates from a renovation in 1902. The detailing on the fireplaces and all of the woodwork is truly amazing.

The White House has been more than just the home of our Presidents and their families. It is recognized everywhere in the world as the symbol of the government and administration of the United States. It is also the only private residence of a head of state that is open to the public, free of charge.

I found it very humbling to wander through the halls where Presidents, First Ladies, leaders and dignitaries have walked, done business, and been entertained. The White House is a home, a symbol, and a museum of American history — not to mention a place where history continues to unfold.

If you are planning a visit to DC — and you like history — I highly recommend getting on the list for a White House tour.