Writing historical fiction by walking in their footsteps 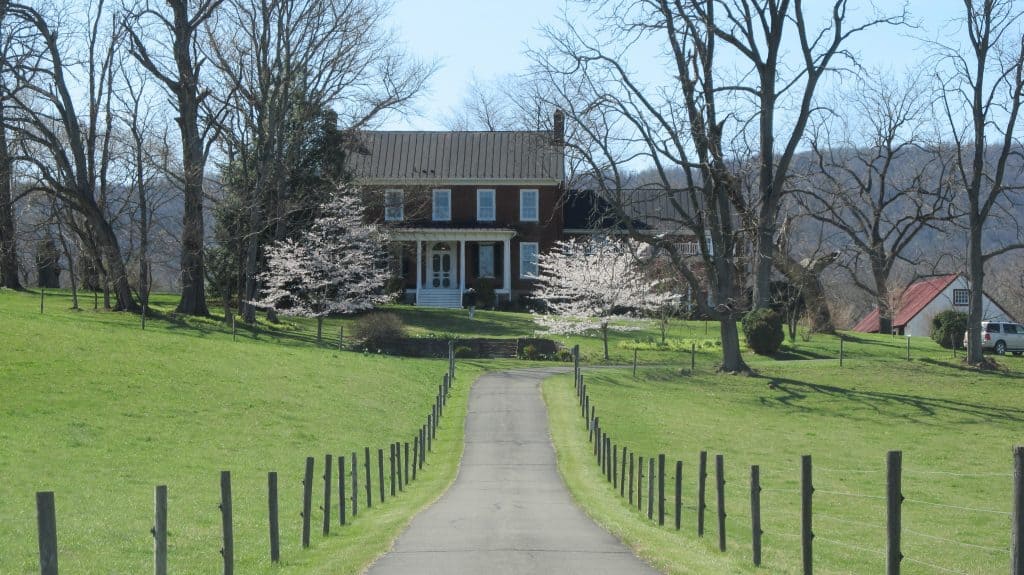 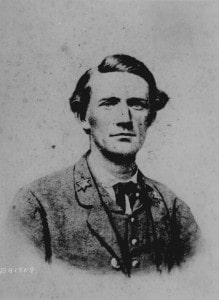 Most of you probably know that the main character in the historical fiction novels SHADES OF GRAY/NOBLE CAUSE was based on the real-life Confederate cavalry officer John S. Mosby and his exploits in “Mosby’s Confederacy.” When I was writing the books I would travel down to Virginia at least once a week to drive down dirt roads and traipse through fields, just so I could walk in the footsteps of that legendary warrior.

Thanks to the Mosby Heritage Area Association, I had the opportunity to visit Mosby’s Confederacy again to tour the home of Civil War diarist Virginia “Tee” Edmonds, whose brothers rode with Mosby. Tee lived in Paris, Fauquier, County, Virginia, in an area strategically important to both the Union and Confederate armies.  A new edition of her diary has just been released with annotated information — and of course I bought a copy and had it signed by the editor, Lee Lawrence.

The book is called “Society of Rebels” and I highly recommend it for a look at what ordinary people went through during the war. (If you call having Mosby’s Rangers in your house, “normal”). In any case, being in the house where Mosby’s men often congregated was the thrill of a lifetime for this historical fiction author. Tee talks about using the large front hall and the parlor for dances, and I can imagine her sitting in what is still the library to write in her diary. I could also just imagine the Rangers who lived their thundering down the stairs and running to the trap door located in the old dining room, at the sound of hoof beats echoing from the lane. 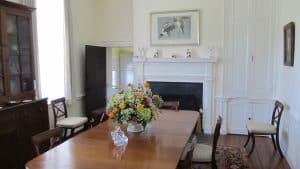 The picture at right is the current dining room, but it was the bedroom of Tee’s parents during the War Between the States. Every room has a fireplace and the floors and woodwork are beautiful. The original house, built prior to 1812, was eventually used as the kitchen because it is detached from the main building, so was safer in case of fire. I have a signed copy of Tee’s diary (before the annotated edition), signed by her granddaughter. It was nice to know a little bit about what happened in each room before my visit. 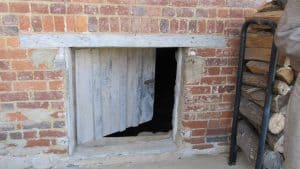 Because members of Mosby’s Rangers stayed in the house in between their cavalry excursions, it was necessary to have a quick way to escape if someone noticed Yankees riding in from the Turnpike. Many of the houses in Mosby’s Confederacy still have these “hidey holes.” In this picture, you can see the small door at Belle Grove that was usually concealed by a stack of firewood. Unfortunately, the Yankees did eventually notice it and two Rangers were caught trying to escape. There is a trapdoor in the house that leads down to a cellar, and the small door you can see in the photo, led to the outside of the house.

The view from Belle Grove’s front porch is toward the Winchester-Warrenton Turnpike (currently Rt. 17) where you can just imagine troops coming and going. The scenery from the back is just as gorgeous, especially in April when everything is beginning to burst into bloom. 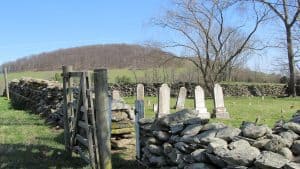 Of course, another interesting part of the property is the family cemetery, which lies a short distance from the main house. Tee is buried there, along with her husband, parents, and two of her brothers, who rode with Mosby’s Rangers. I can’t begin to recall how many cemeteries I have walked through since I first began to write historical fiction. I love reading the names, and imagining the lives that were lived in those tumultuous times.

Since I was taking the time to make the trip into Mosby’s Confederacy, I decided to re-visit places I haven’t been to in years.

A trip down Mosby Highway 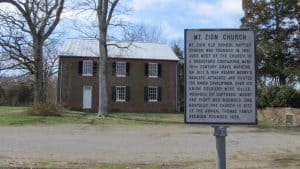 My first stop was Mt. Zion Church on Rt. 50 (John Mosby Highway). This building was used as a Civil War hospital, and was the site of a fight between Mosby’s men and a Federal cavalry unit of about 150. Mosby’s men killed or wounded about 100 of them. The battle is recounted in a number of books written after the war by Mosby’s Rangers.

In the cemetery attached to the church are the grave markers indicating the names of some of the Union soldiers who had died in the battle. 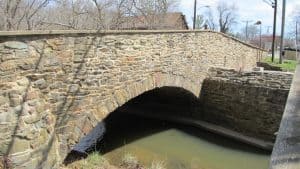 Continuing west on Rt. 50 is like taking a step back in time. Not far from Mt. Zion Church is the little village of Aldie, where the historic Aldie Mill is located. Another interesting feature of this town is the small stone bridge that lies under the highway. You wouldn’t know it was there unless you are a Mosby fanatic (hmmm), and then you would have read about the cavalry clash there. As the story is told, Mosby’s horse ran away with him during the battle (over the stone bridge), straight toward the Federal line, causing them to retreat. 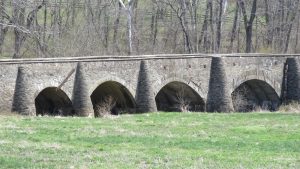 An even more spectacular bridge is located just a little farther west on the Mosby Highway. Goose Creek Bridge is a spectacular five-span stone bridge that was the site of another large battle during the Civil War, although this time Mosby’s Rangers were not involved. There is a nice pull-off to take pictures, as well as a scenic flower walk near the bridge. It’s a beautiful place to spend a sunny Spring day!

I took pictures at other historic sites that day, including the home of the mayor of Middleburg, with whom Mosby stayed, and Mt. Carmel Church, a little farther up Ashby’s Gap, the site of another cavalry battle. I hope to write about them in the upcoming days, but I’ve got to get back to work on my next historical fiction novel while the memories are still fresh.