I was surprised and excited to find out that my romantic suspense novel MEANT TO BE won a bronze medal in the prestigious Readers’ Favorite International Book Awards!

The contest featured thousands of contestants from over a dozen countries, including entries from NYT best-sellers and celebrities like Jim Carrey and Henry Winkler. The awards ceremony will take place in Miami, Fla., on Nov. 19, coinciding with the Miami Book Fair International — and yes, I am planning to attend! (All I need is a formal evening gown).

For those of you who haven’t read this book, MEANT TO BE is a romantic suspense novel that starts on the sun-swept beaches of Ocean City, Md., and ends in the rugged mountains of Afghanistan. The book also won the 2015 New Jersey Romance Writers Golden Leaf Award in Romantic Suspense, and was a finalist in Foreword Magazine’s 2016 IndiFAB Book of the Year contest. 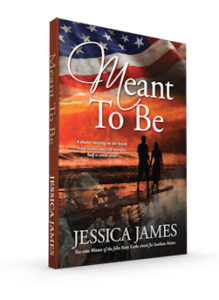 Combining military suspense, patriotism, and romance, MEANT TO BE tells the tale of two people who meet by chance on the beach and find their lives intertwined in a way neither one imagined. One active duty military member described it as, “American Sniper but intertwined with an unforgettable, epic love story,” while Publishers Weekly, the industry’s leading trade journal, called it “an endearing page turner,” and “sweetly sentimental and moving.”

I will be traveling to Baton Rouge, LA, next month for a writer’s SWAT Academy, then to Miami in November for the award’s ceremony. This has been a very busy travel year for me, so I guess it’s fitting that I throw in one more trip before hibernating for the winter. (Did I ever tell you how much I dislike Pennsylvania winters?)

As an update for those of you who prefer historical fiction, I plan to release an “unabridged” version of SHADES OF GRAY before Christmas that will include a bunch of chapters that were cut from the printed and ebook versions. Warning: It will be l-o-n-g.