Mixing the new and the old in San Diego

As many of you know, I spent a week in San Diego attending the national RWA (Romance Writers of America) conference, but I left enough time to do some sight-seeing as well. In addition to getting a tour of the naval base on Coronado (where the Navy SEALs train), I took the opportunity to soak up some history of California in Old Town. 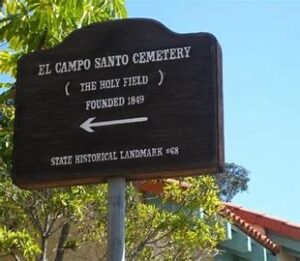 Old Town San Diego is considered the “birthplace” of California because it is the site of the first permanent Spanish settlement. It was there in 1769, that Father Junipero Serra came to establish the very first mission in a chain of 21 missions that were to be the cornerstone of California’s colonization. Father Serra’s mission and Presidio were built on a hillside overlooking what is currently known as “Old Town San Diego.” 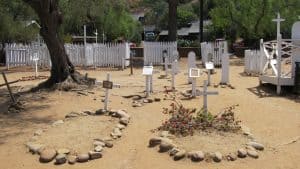 I have visited many cemeteries on the East Coast and in the South, but El Camp Santo was quite different. Instead of the ornate granite tombstones — or even single pieces of slate — you can see that the graves are marked by stones and simple crosses.

Old Town is now a historic park that gives visitors the opportunity to see the old buildings — from jails and schoolhouses to hotels and blacksmith shops,  along with informative exhibits. In addition to being a great place to learn about the history of the area, it was also fun to shop in the many novelty stores. 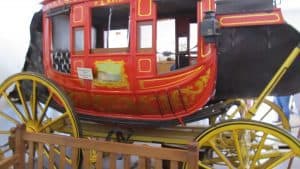 Even though the history is of Old Town about the same era as my hometown of Gettysburg  — the architecture and ambience are quite different. It’s always neat to see things up close that you have only read about in books. I also found it interesting that the early history of San Diego goes back quite a long way — like thousands of years!

When the Spaniards arrived, they used the word Diegueño to identify the Indians associated with the Mission there. In 1542 explorer Juan Rodriguez Cabrillo reported that the native indians, “were good natured and an attractive people.” With the arrival of the Spanish settlements in 1769, many of the Indians retreated to the hills.

During my visit to San Diego, I also took a tour of the USS Midway and the Navy base on Coronado. I’ll be posting about those experiences in the upcoming weeks.