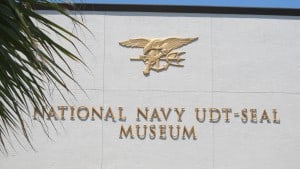 I’m home after flying more than 2,000 miles, driving more than 500 miles and walking at least 20 miles in heels and flip-flops — all in four action-packed days! It was hectic and exhausting, but worth every aching muscle and minute of lost sleep.

I started my journey by flying to Clearwater, Fl., where I rented a car and drove across the state to visit the UDT-Navy SEAL Museum in Fort Pierce. (I have to mention the beautiful hotel where I stayed on Hutchinson Island–Hutchinson Island Plaza. It’s one I can highly recommend). 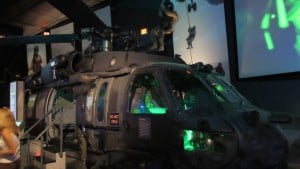 The SEAL Museum was great for research because I got to see (and hold) a lot of the weapons, equipment, and clothing used by SEALs and other special operation units. There were also static displays of boats, ATV’s, a Blackhawk helicopter, and every type of vehicle imaginable.

It was very interesting to sit inside the Blackhawk, which was the exact  aircraft used by Navy SEALS in 2012 to raid a compound in Somali. The team killed nine Somali pirates and freed two hostages, U.S. citizen Jessica Buchanan and Danish citizen Poul Hagen Thisted. 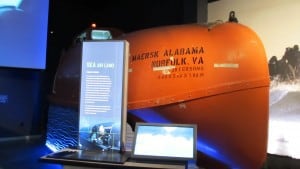 Another exhibit was the lifeboat from he Maersk Alabama, the ship that was captured by Somali pirates on April 8, 2009. You can board the lifeboat upon which Captain Richard Phillips was held hostage for five days before being rescued on April 12. The holes left by the SEAL bullets as they opened fire simultaneously are visible. (Three bullets killed three pirates al at the same time on rough seas. Wow).

On a side note, I was greeted by a young German shepherd when I entered a side door, and was told he was a cousin of Max, from the movie “Max.” I looked it up after I got home and found the trailer here. What a tearjerker! Max was a Marine search dog in Afghanistan whose handler was killed in action. Watch the trailer to see a hint of what happens! 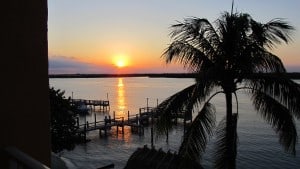 I’ll end this post with a photo from my room on Hutchinson Island. The perfect setting to end a hectic travel day.

My next post will be on the Special Operations International Conference I attended in Tampa. Stay tuned!