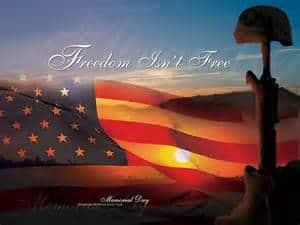 Like others, I feel this day is too sacred to even begin to put into words, so I’ll share the message of Ronald Reagan from his speech at Arlington some thirty years ago.

“In America’s cities and towns today, flags will be placed on graves in cemeteries; public officials will speak of the sacrifice and the valor of those whose memory we honor.

In 1863, when he dedicated a small cemetery in Pennsylvania marking a terrible collision between the armies of North and South, Abraham Lincoln noted the swift obscurity of such speeches. Well, we know now that Lincoln was wrong about that particular occasion. His remarks commemorating those who gave their “last full measure of devotion” were long remembered. But since that moment at Gettysburg, few other such addresses have become part of our national heritage—not because of the inadequacy of the speakers, but because of the inadequacy of words.

I have no illusions about what little I can add now to the silent testimony of those who gave their lives willingly for their country. Words are even more feeble on this Memorial Day, for the sight before us is that of a strong and good nation that stands in silence and remembers those who were loved and who, in return, loved their countrymen enough to die for them.

Yet, we must try to honor them—not for their sakes alone, but for our own. And if words cannot repay the debt we owe these men, surely with our actions we must strive to keep faith with them and with the vision that led them to battle and to final sacrifice…

The willingness of some to give their lives so that others might live never fails to evoke in us a sense of wonder and mystery. One gets that feeling here on this hallowed ground, and I have known that same poignant feeling as I looked out across the rows of white crosses and Stars of David in Europe, in the Philippines, and the military cemeteries here in our own land. Each one marks the resting place of an American hero and, in my lifetime, the heroes of World War I, the Doughboys, the GI’s of World War II or Korea or Vietnam. They span several generations of young Americans, all different and yet all alike, like the markers above their resting places, all alike in a truly meaningful way.

Winston Churchill said of those he knew in World War II they seemed to be the only young men who could laugh and fight at the same time. A great general in that war called them our secret weapon, “just the best darn kids in the world.” Each died for a cause he considered more important than his own life. Well, they didn’t volunteer to die; they volunteered to defend values for which men have always been willing to die if need be, the values which make up what we call civilization. And how they must have wished, in all the ugliness that war brings, that no other generation of young men to follow would have to undergo that same experience.

As we honor their memory today, let us pledge that their lives, their sacrifices, their valor shall be justified and remembered for as long as God gives life to this nation. And let us also pledge to do our utmost to carry out what must have been their wish: that no other generation of young men will every have to share their experiences and repeat their sacrifice.”