Companion book to NOBLE CAUSE available 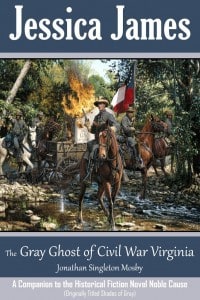 I have gotten so many questions about who the main character in my historical fiction novel NOBLE CAUSE (formerly SHADES OF GRAY), was based upon, that I decided to write a book about him! Here’s the blurb!

No name in the annals of the Civil War conjures a more romantic and awe-inspiring image than that of Confederate Colonel John Singleton Mosby of Virginia.

The epitome of the Southern cavalier, Colonel Mosby was a charismatic officer whose small band of partisans outwitted and outfought the Union army on the fields and farmlands of northern Virginia. So great was the panic inspired by this one officer’s military ingenuity, so prominent was the threat he created to the Union forces, that he came to be known in the north as more of a myth than a man. (Sounds like Col. Alexander Hunter, right)?
I wrote this book as a way to share this real-life soldier’s story with my fiction fans who might want to learn more. It takes readers on a journey with a rag-tag group of Rebels who threw aside the established rules of warfare, effectively using fear as their weapon of choice and surprise as their watchword.
﻿

Right now the book is available on Amazon and Smashwords for only $0.99, but the price will go up to $2.99 after this weekend. It will soon be available on Kobo and at Barnes and Noble, as well as I-Tunes, etc.

Can’t wait for you to read about the exploits of this amazing Confederate officer and to hear what you think.

I plan to make this the first in a series of books on Forgotten American Heroes, so stay tuned.