Several of the homes known to be safe houses for Mosby’s Rangers will be open for tour this Sunday, thanks to the Mosby Heritage Area Association. The homes include Seven Springs, the Hathaway House, Brookside, Belle Grove, and Oakham.

I cannot wait! This is a rare treat to visit these private homes and experience Mosby history.

Belle Grove
Delaplane, VA 20144
Amanda “Tee” Virginia Edmonds lived at Belle Grove and kept a diary during the war. Mosby’s men stayed in homes of the local residents rather than in regular army camps, so Belle Grove was rather like a perpetual house party during this period. Tee was in her mid-20s, and being quite spirited, restless, romantic and a lover of excitement, was in her element at the time.
Belle Grove’s brick edifice was built in 1812, and it is still the home of John Edmonds’ descendants.

I’ve been by Brookside many times in my search for Heartland, which was Mosby’s headquarters until it was burned to the ground by the Yankees. (The chimney still remains and I did finally find it).

After the burning of Heartland, Brookside became the new headquarters for Mosby and his men.

How exciting that I will be able to go inside!
Hathaway House
7064 Young Rd.

I’ve written about the Hathaway House before, and have actually gone inside before thanks to the very generous and kind owner. This is the house where Mosby was awakened in the middle of the night by the Yankees.
He ended up climbing out the window into a tree – which still stands – and went undiscovered by the enemy.
You can see the tree in this picture at the back of the house. Talk about walking in the footsteps of history! 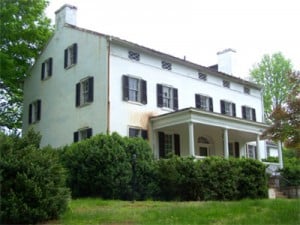 On December 29, 1862, Stuart and Mosby spent the night at the home of Colonel Hamilton Rogers, just outside of Middleburg, Loudon County, and on the following morning, Stuart gave Mosby nine men and left him behind to conduct partisan activities.
While Stuart was settling into winter quarters near Fredericksburg in January 1863, Mosby was in Northern Virginia beginning operations against Union troops. Col. Rogers’ daughter lived here and married Col. John Fairfax who served on General Longstreet’s staff.

A big part of my research for Noble Cause and Shades of Gray was walking in the footsteps of Mosby. This is truly going to be a great experience! I’ll be writing about the actual tour in future weeks.