A night at “The White Castle”

Can you imagine my delight when I first laid my eyes on the majestic Nottoway Plantation outside of Baton Rouge, La.? The 64-room, three-story palatial mansion is sometimes referred to as an “American castle,” and it’s easy to see why.

I walked all over this plantation, including at 1:30 in the morning and at sunrise. I didn’t want to sleep and miss a single minute!

Nottoway was completed in 1859 for John Hampden Randolph and his wife, Emily Jane Liddell Randolph, and it became home to their eleven children. The mansion boasts 53,000 square feet, and originally sat on 400 acres of highland and 620 acres of swamp.

Thankfully, Nottoway survived the Civil War, and is now one of the most visited plantations in the South. That survival is a testament to its original owner. It was Randolph’s business savvy that fostered his tremendous wealth, and his business savvy that saved Nottoway during the hard times during and after the Civil War. Both his sense of grandeur and love of his family brought Nottoway to life — and has kept it that way for more than 150 years.

Randolph wanted a more “fitting home” to honor his position and stature, so acquired the land for his future castle in 1855.

The beautiful property faces the Mississippi River, which was a major transportation waterway of the time. Passing steamboats and showboats made river watching an exciting pastime — then and now.

I walked down to the levy early in the morning, and watched little tug boats push huge barges down the river.

When Randolph began to compile the materials for his castle, he used cypress, which was cut and cured under water for four years. The most unique feature of cypress was not its durability, but its resistance to termites. Considered a “junk wood” back then, it is almost impossible to buy now because it’s so highly valued.

Randolph made it clear that no expense would be spared in the construction of his new home, which was completed in 1859 at an estimated cost of $80,000. (We were told the cost today would start at $40 million). Nottoway has 64 rooms in its 3 floors, 6 interior staircases, 3 modern bathrooms, 22 massive square columns, 165 doors and 200 windows.

Designed in the Greek Revival and Italianate style, it features 15½ foot high ceilings and 11 foot doors. Its most unique room is a semi-circular white ballroom with Corinthian columns and hand-cast archways.  (I have some great photos of that for a future post!)

﻿﻿When it was completed, Nottoway included a massive entrance hall, the grand white ballroom, a formal dining room, a gentlemen’s study, another dining room, music room, numerous bed chambers, master bedroom, wicker room, bowling alley, library, Hall of their Ancestors, front parlor, sitting rooms, breakfast room, wine room, dairy, laundry and servant rooms, and boys’ wing. The kitchen was located in a separate building adjacent to the house so that a fire in the kitchen would not destroy the main home.

As you can see, massive columns three stories high support the immense castle. Its exterior includes spacious balconies from the second and third floors, providing wonderful viewing arenas for the activity on the Mississippi River. Gracious curved granite steps lead to a grand entranceway at the front of Nottoway.

Randolph hired New Orleans resident, John Nelson, to draft a landscape plan for the property. With the house as the centerpiece, Nelson incorporated 120 fruit and citrus trees, 12 magnolia trees, poplar and live oak trees, 75 rose bushes, 150 strawberry plants and a variety of flower and vegetable gardens. Unfortunately, most of Nottoway’s beautiful gardens are gone today, since the Mississippi River has taken about six and a half acres of land from the front of the property.
﻿﻿
﻿﻿Besides the massive home, Nottoway Plantation included acres of prime farmland, a variety of other buildings including slave quarters, a schoolhouse, greenhouse, stable, steam-powered sugar house, wood cisterns, and other necessary buildings for an agricultural operation.
After the family moved into Nottoway, Randolph continued to own Forest Home Plantation, with its additional 1,500 acres of farmland and substantial acreage.


I’ll post some interior photos later, but here are a few of the other photos I took at night. The graveyard freaked me out a little in the middle of the night. It kind of glows from the lighting.

It just so happened that there was a full moon the night I was there, so that made everything brighter as well.

According to our tour guide, Nottoway is a busy wedding venue — sometimes doing five weddings per weekend. It’s easy to see why! The grounds, the house, the accommodations, the on-site restaurant, (5-star), are all spectacular. 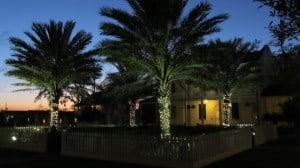 I am in the process of reading the diary written by one of Randolph’s daughters that talks about growing up at Nottoway.

Needless to say, I had a great time there, and can’t wait to return!