A visit to George Washington’s church

After our visit to Occoquan, my sister and I went into Old Towne Alexandria where we took a tour of Christ Church. Amazing to think it was built almost 240 years ago and was attended by George Washington and Robert E. Lee, among other notable Virginians.
Construction of the church began in 1767, and was completed in February 1773. You can see from this photo that the church was originally built in a quiet, wooded area, but it is now in the heart of Alexandria. 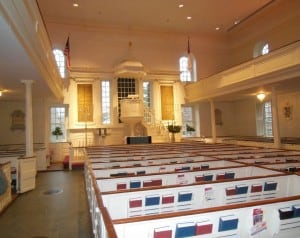 A 1602 canon of the Church of England directed that the Ten Commandments be set upon the East-end of every Church and Chapel where the people may best see and read the same, and other chosen Sentences. At Christ Church, these also include the Apostles’ Creed, the Lord’s Prayer, and the Golden Rule. The background of the panels was originally white, but over the years it has mellowed into the soft gold seen today. The panels have never been retouched. (You can just barely see them in the front of the church in this photo). 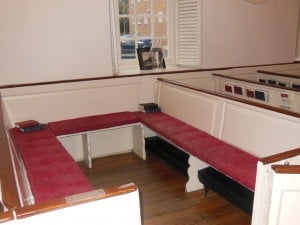 George Washington was first elected to the Truro Parish in 1762. He bought and later rented a box family pew and attended services when in Alexandria. You are even allowed to sit in the pew!
Another notable Virginian, Confederate General Robert E. Lee, attended Christ Church throughout his life from the time he was three. 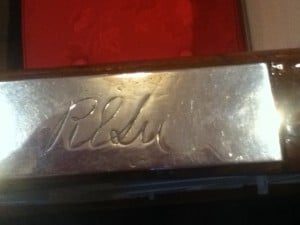 A silver plaque on the chancel rail marks the spot, where on July 17, 1853, with two of his daughters, Lee knelt to be confirmed by the assistant bishop of Virginia, John Johns. Lee married George Washington’s step-great-granddaughter, Mary Anna Randolph Custis.

It’s wonderful to be able to tour old buildings and hear about the history behind them. Next week I’ll do a post on our visit to Mount Vernon, Washington’s home.