149th anniversary of the Gettysburg Address

Today is an historic day in Gettysburg – the anniversary of the day President Abraham Lincoln delivered his famous address while dedicating the National Cemetery in 1863.

The release of Steven Spielberg’s movie has brought renewed interest to this historic day, especially since Spielberg himself is in Gettysburg to deliver the keynote address at the annual “Remembrance Day” ceremony at the cemetery.

On Saturday I attended the Remembrance Day Parade, which is one of my favorite events in Gettysburg. Remembrance Day is dedicated to honoring the slain of Gettysburg, the veterans of that horrific battle, and the President who led us through it.

The weather was fantastic for a November day in Pennsylvania. I’ve been to many Remembrance Day events that were freezing, windy, sleeting and bone-chilling cold.

As you may know, the Battle of Gettysburg was fought in July of 1863, and was the single bloodiest battle of the Civil War. Over the course of three days, more than 45,000 men were killed, injured, captured or went missing.

Charged by Pennsylvania’s governor, Andrew Curtin, to care for the Gettysburg dead, an attorney named David Wills bought 17 acres of pasture to turn into a cemetery for the more than 7,500 who fell in battle.

Wills invited Edward Everett, one of the most famous orators of the day, to deliver a speech at the cemetery’s dedication. Almost as an afterthought, Wills also sent a letter to Lincoln—just two weeks before the ceremony—requesting “a few appropriate remarks” to consecrate the grounds.

At the dedication, the crowd listened for two hours to Everett before Lincoln spoke. Lincoln’s address–just 272 words long–lasted just two or three minutes. The speech reflected his redefined belief that the Civil War was not just a fight to save the Union, but a struggle for freedom for all, an idea Lincoln had not championed in the years leading up to the war.

It’s ironic that the conclusion to his speech was: “The world will little note, nor long remember what we say here, but it can never forget what they did here. It is for us the living, rather, to be dedicated here to the unfinished work which they who fought here have thus far so nobly advanced. It is rather for us to be here dedicated to the great task remaining before us—that from these honored dead we take increased devotion to that cause for which they gave the last full measure of devotion—that we here highly resolve that these dead shall not have died in vain—that this nation, under God, shall have a new birth of freedom—and that government of the people, by the people, for the people, shall not perish from the earth.” 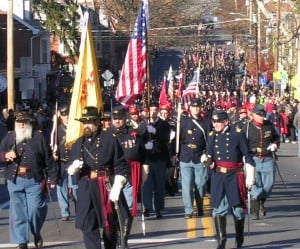 I’m so lucky, as an historical fiction author, to live in this area and get to see these great annual events. Next year, of course, is the 150th anniversary of both the battle and the Gettysburg Address so they will be even bigger than usual. Estimates are that the anniversary events will draw four million people to this small town!

I hope everyone has a wonderful Thanksgiving holiday! Stay safe!