I had a wonderful time signing books at the 150th Battle of Antietam re-enactment on Saturday, and had the great fortune to sign along side best-selling historical fiction author Jeff Shaara, who just released his latest book, A Blaze of Glory, A Novel of the Battle of Shiloh. 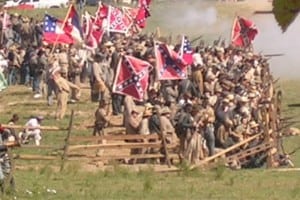 Jeff, of course, is the son of Michael Shaara, who won the Pulitzer Prize for his novel about the Battle of Gettysburg, called The Killer Angels. Jeff went on to finish the trilogy after his father passed away, penning The Last Full Measure and Gods and Generals, as well as numerous other novels.

The re-enactment had lots of sutlers that made for some great shopping if you enjoy browsing through Civil War books and looking at Victorian clothing. I left in the middle of the afternoon re-enactment, but did stop to snap a few photos during the battle. They had a great crowd, which is why it took me an hour and half to go three miles on my way in, and why I wanted to get a head start getting out.

As you may know, Antietam was the bloodiest single day of fighting on American soil in our history, with more than 25,000 killed, wounded or missing. Entire regiments on both sides — 1,000 men or more — were wiped out in minutes, and their replacements fell just as quickly on the blood-soaked earth. 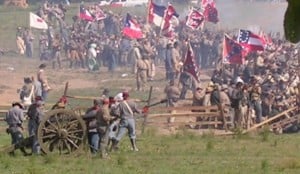 The weather was absolutely perfect for a large outdoor event on Saturday with sunny skies and a nice breeze. I’m sure all of those who were wearing wool uniforms were pleased that it was not 90 degrees and humid like it is for the Battle of Gettysburg.

This is the third 150th Civil War event that I’ve attended. I released Noble Cause in Charleston, S.C., on the 150th anniversary of the first shot being fired, and signed books at the 150th anniversary  of First Manassas. I’m hoping to attend the 150th Vicksburg event and, of course, the big one — the Battle of Gettysburg next year.

This Saturday I’ll be signing books at the Edinburg ‘Ole Time Festival in Edinburg, Va. More on that later this week…