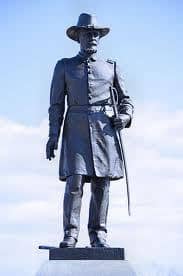 Can you see it?

If you visit the Gettysburg Civil War Battlefield, make sure to look up at the 13th Regiment Vermont Volunteers monument located on the east side of Hancock Avenue.

Though not real obvious, you might notice by the figure’s right foot something protruding over the edge of the base on which the statue of 2nd Lt. Stephen F. Brown of Co. K stands.

The object is a hatchet.

This following information is from an article “The Battle of Gettysburg” by W.C. Storrick, Retired Superintendent of Guides, 1957.

At the Battle of Gettysburg the 13th Vermont was a part of General (George) Stannard’s Vermont command. The 2nd Vermont Brigade had been left on outpost duty in Virginia until the third  day after the Army of the Potomac had passed in pursuit of Lee’s troops into Maryland and Pennsylvania.

Then the brigade got orders to proceed by forced marches to join the Army of the Potomac. The latter was also on a forced march, but in six days’ time the Vermonters had overtaken the main body.

Just before the first day’s battle, Captain Brown’s command came up to a well at which was an armed guard. “You can’t get water here,” said the guard. “Gainst orders.”

“Damn your orders!” said Captain Brown, and then with all the canteens of the men, and with only one man to help him, he thrust the guard aside and filled the canteens.

His arrest followed, and he was deprived of his sword. 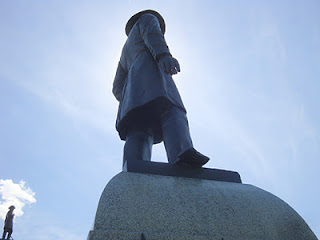 When the battle began, Captain Brown was a prisoner. He begged for a chance to rejoin his company, and was finally allowed to go.

His men were far away at the front and he had no weapons. He picked up a camp hatchet and ran all the way to the firing-line, reached it, rushed into the fray, and singled out out a Rebel officer 50 yards away, penetrated the Rebel ranks, collared the officer, wresting from him his sword and pistol, after which he dropped the hatchet, while his men cheered him amid the storm of bullets and smoke.

When the design for the 13th Vermont monument was made, it was the desire of the committee to have the statue represent Captain Brown, hatchet in hand. Accordingly, a model was prepared, but the Federal Government would not permit its erection.

A second model was approved, showing Captain Brown holding a sabre and belt in his hand, the hatchet lying at his feet as though just dropped. The sabre depicted in the statue is an exact reproduction of the one captured.

Now, as Paul Harvey used to say, you know the rest of the story!

I have often run across factual accounts that make historical fiction or Civil War romance appear tame in comparison. This is one of those stories. Hope you enjoyed!