My sister and I had the privilege of helping once again place flags on the graves of veterans at Evergreen Cemetery in Gettysburg for Memorial Day.

The cemetery has veterans from every war, including the Revolutionary War, War of 1812, Civil War, World War I, World War II, Korean, Viet Nam and modern day conflicts.

To honor the soldiers’ gravesites with an American flag – no matter what the war – is a privilege, and has been a tradition for me for many years.

Placing flags on veterans’ graves is also a tradition at Arlington National Cemetery, though on a much bigger scale. Every year since the late 1950s, soldiers of the 3rd U.S. Infantry place flags at each of the more than 260,000 gravestones. They then patrol the cemetery 24 hours a day for the rest of the long weekend, making sure that each flag remains standing.

Memorial Day itself has a Civil War connection. While Waterloo, N.Y., was officially declared the birthplace of Memorial Day by President Lyndon Johnson in May 1966, it’s difficult to prove conclusively the origins of the day. Women of the South began decorating the grave of their war dead in the 1860s, and General Logan gave an official proclamation for the day in 1868. 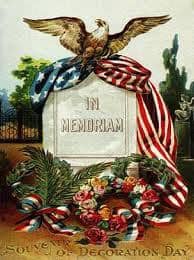 There is also a legend that in 1866 a group of women from Columbus, Mississippi, went to the local cemetery to decorate Confederate graves. They noticed some graves in the corner of the cemetery that were unadorned, and after placing flowers on those markers, discovered that they were Yankee graves. One of the women responded “We are sure there are mothers, sister, wives, or sweethearts who are mourning these dead men, so we are going to honor them also.”

To help re-educate and remind Americans of the true meaning of Memorial Day, the “National Moment of Remembrance” resolution was passed on December 2000 which asks that at 3 p.m. local time, for all Americans “To voluntarily and informally observe in their own way a Moment of remembrance and respect, pausing from whatever they are doing for a moment of silence. 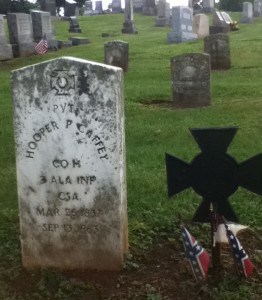 I hope everyone remembers that, in addition to the brave souls who have given the ultimate sacrifice for this country, there are thousands of young men and women in harm’s way right now. This weekend is a time to remember those who died for the freedoms we enjoy, and to keep in our prayers those who risk their lives in the nation’s service.

Have a safe and happy holiday!