Visiting the “Castillo” in St. Augustine

Continuing my posts on my trip to Amelia Island for the Amelia Island Book Festival, I spent two days in St. Augustine and squeezed as much as I possibly could into those two days!

One can’t go to St. Augustine without seeing “the fort.” It is a huge, looming structure that is one of the most extraordinary places in the United States.

Construction of the Castillo de San Marcos sarted in 1672, making it one of the oldest standing structures in North America. This fortress served six different flags, survived hurricanes and withstood bombardments and sieges. Though it has undergone a lot of changes over the years, it reportedly appears much as it did when it was completed in 1756.

The Castillo (castle) was initially built by the Spanish to protect their empire in America. The fortress construction uses a “bastion” system with a star-like outline which eliminates blind spots for the guards on the sentry boxes. It also allows increased firepower by allowing multiple cannons to fire on the same target with a crossfire effect.

The fort is open to the public and is great fun to explore. Operated by the National Park Service, you can wander through the different casemates (rooms) that were used for food storage and military supplies such as gunpowder and cannonballs. All of these were constructed between 1738 and 1756, a time of almost constant warfare between Spain and England. The walls were raised to 35 feet during this time.

One of the most interesting parts of the fort I thought, was the courtyard, from which all the other rooms are entered. The courtyard was called “the place of arms” and was where soldiers would assemble and drill.

I find it so interesting to walk through old structures like this. As I mentioned in an earlier post, we think of buildings that were around during the Civil War as old here in Gettysburg To think this fort was around before our country was even founded is mindboggling! 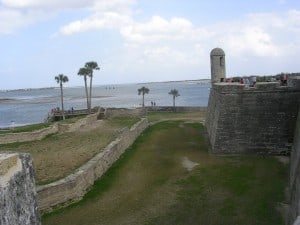 The Fort was pretty crowded when I went my first afternoon in St. Augustine, but when I went early the next morning I had the whole place to myself. It was great to walk around and try to imagine all of the people who had stood on that exact same spot.

One other interesting fact about the Fort, it was constructed of a rather rare form of limestone called coquina, a Spanish word meaning “tiny shell.” This provided an unexpected feature of the fort. A cannon ball fired at more solid materials, such as granite or brick would shatter the wall into flying shards. Cannon balls fired at the walls of the Castillo burrowed their way into the rock and stuck there.

Next week I’ll talk about my trip to the Fountain of Youth and some other sites in St. Augustine.