I’m interrupting my posts on my trip to the Amelia Island Book Festival, because I volunteered at a great event over the weekend, and want to share.

In commemoration of the 200th anniversary of the War of 1812, the Mosby Heritage Area Association sponsored a two-part event that featured a talk on the United States flag and a tour of the historic home, Rokeby.

The afternoon began with Marc Leepson, author and historian speaking on The Star-Spangled Banner at the Carriage House at Oatlands Plantation. Following his talk, we went to Rokeby where the Articles of Confederation, the Declaration of Independence, and the Constitution were stored for safekeeping in 1814 during the British occupation of Washington. The hallowed documents were kept in a still-intact vaulted room in the cellar.

Rokeby was originally built in the Georgian style of architecture. It was started in 1757 and completed in 1760 by Charles Binns II, who was the first clerk of the court for the newly formed Loundoun County, Virginia.

Walking in the front door was like taking a step back in time. Upon entering, the first thing my eyes were drawn to was the large painting of George Washington, which the owner told me had hung at the Smithsonian. To the left of the entrance foyer were the library and study; to the right, the parlor and dining room. All of the rooms have fireplaces, and the owners have beautiful artwork hanging everywhere.

In the basement was a stone cooking fireplace, which is unusual as the kitchen was often in a separate building in those days because of the danger of fire. 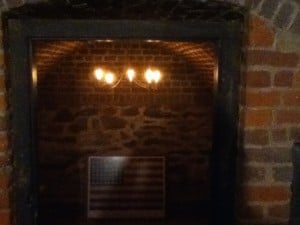 Of course, the most interesting feature of the home was the large brick vault with two small windows. At one time there were iron bars on those windows and an iron door, but these were removed during the Civil War.

When the British planned on attacking Washington in August 1814, Stephen Pleasonton, a clerk of the Department of State had the archives of the United States moved to Leesburg to the then-vacant house of William Binns, grandson of Charles Binns II.

The documents were put int the vault and guarded by the Rev. Littlejohn, a Collector of Revenue for Loudoun County.

Who knew that all of the treasures of our country were once stored in a basement in rural Virginia? Many thanks to Rokeby’s owners and the Mosby Heritage Area for this great program. It was a wonderful treat!