Sights from my Southern Tour

I’m back in Pennsylvania and obviously didn’t do a very good job of keeping up with my blog while on my Southern Tour for the Amelia Island Book Festival. Honestly between cocktail hours, dinners, presentations, and trying to go sightseeing every spare moment, I didn’t have time. I took lots of pictures though, so I can catch up now.

The first photo is from my balcony at Myrtle Beach. I stayed at The Dunes Resort, and wish I would have had time to use all the facilities. They had two pools and an indoor tube river that I never had time to take advantage of.

After spending one night in Myrtle Beach, I drove down to the historic port town of Georgetown–a perfect delight for an historical fiction author! First settled in 1526 by the Spaniards, Georgetown was the first settlement in North America. It didn’t last however, thanks to a hurricane and Indian attacks, but was later established in 1726 in honor of King George II.

Georgetown, now the seat of the county, was once an important international port, serving the area’s thriving rice plantations. Today, several marinas cater to traffic on the Intracoastal Waterway and the old docks along the waterfront have been converted into Harborwalk, an array of restaurants and shops.

Sixteen blocks of the downtown area are listed on the National Historic Register. This photo to the right is one of Georgetown’s earliest houses, built circa 1737 by John and Mary Perry Cleland.

Mrs. Cleland inherited the property from her father who had been granted a large tract in 1705 including the site of present day Georgetown. This house is a raised tidewater residence with its main entrance facing the Sampit River. It features elements of the Georgian and Federal styles. 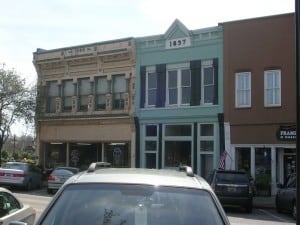 The downtown area is beautiful and great for shopping and dining. I could have spent all day browsing the different boutiques and shops, but I only spent a few hours in town before hitting the road again. I stopped at one plantation house, and then continued on my search through the Francis Marion State Park, hoping to find the grave of  General Francis Marion (the Swamp Fox), a patriot and officer during the Revolutionary War. 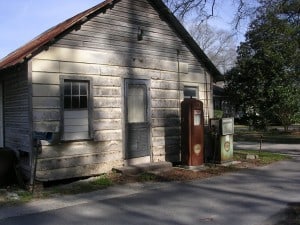 This area is pretty desolate, but I did slam on the brakes and back up to take this photo. It pretty much shows the rural South Carolina vista of that area.

I never did find the grave of Gen. Marion, but headed on down to my niece’s house outside of Charleston for the night. Then it was on to Amelia Island.