Gone with the Wind anniversary is big business

If you have a loved one who is a Gone with the Wind, you shouldn’t have any trouble finding a gift for them!

In addition to anniversary edition books and DVD’s, I found everything from music boxes, to slippers, figurines and snow globes. There are Christmas ornaments, reproduction photos of the cast, collector plates, calendars… and my favorite, this movie poster.

This poster is the epitome of romance and the grandeur of the Old South. I love it! (Hint, Hint) 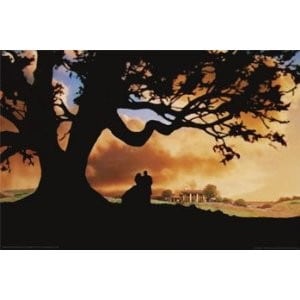 Despite this Civil War novel’s popularity, (it sold more than a million copies in six months), most people know very little about its author, Margaret Mitchell.

Born in 1900 into a wealthy and politically prominent family, Mitchell was a lifelong resident of Atlanta, Georgia.

Her grandfather, Russell Crawford Mitchell, enlisted in the Confederate States Army in July 1861, and was later severely wounded at the Battle of Sharpsburg. After the Civil War, he made a large fortune in real estate and timber lands. Her grandfather on the maternal side also fought for the Confederacy.

On summer vacations, Mitchell would visit her maternal great-aunts, Mary Ellen (“Mamie”) and Sarah (“Sis”), who still lived at the family’s plantation home in Jonesboro. Mamie had been twenty-one years old and Sis thirteen when the American Civil War began in 1861. Mitchell recalled her childhood was spent, “on the bony knees of veterans and the fat slippery laps of great aunts,” who had lived through the war.

She was ten years old before she learned the Confederacy had not won.

It is said that an image of the South was fixed in Mitchell’s imagination when at six years old her mother took her on a buggy tour through ruined plantations where she witnessed “Sherman’s sentinels,” the brick and stone chimneys that remained after William Tecumseh Sherman’s “march” through Georgia.

Tragically, Margaret Mitchell was struck by a speeding automobile as she crossed a street in Atlanta while on her way to see a movie on the evening of August 11, 1949. She died at Grady Hospital five days later without regaining consciousness. The driver was an off-duty taxi driver who was arrested for drunken driving. It was discovered that he had been cited 23 times previously for traffic violations.

I can’t help but wonder what else Mitchell could have written had her life not been cut short. She certainly left a legacy with the imagery she created with Gone with the Wind.