There are probably some people out there who don’t know that Arlington National Cemetery is located on the grounds of Arlington House, the home of Confederate General Robert E. Lee for three decades. It has long been a place that I wanted to visit, so I thought I’d share my experience for those who may never get to see it firsthand.

Custis married Mary Lee Fitzhugh in 1804, and their only surviving child, Mary Anna, grew up and married Lt. Robert E. Lee, a childhood playmate. The couple eventually inherited the house and had seven children. When touring the home, it isn’t hard to imagine the sound of all of those children playing. One of the downstairs rooms was their favorite, and little Agnes Lee recalled how they “rode round and round on stick horses, making stables of the niches in the (window) arches.”

With the coming of the Civil War, Arlington House ceased to be a home. Lee left for Richmond in April of 1861, and Mrs. Lee left in May when Union troops prepared to occupy Arlington Heights. Interestingly, Mrs. Lee entrusted the house keys to a servant, Selina Gray, which was a great deal of responsibility. This was not uncommon during the Civil War, and was in fact fairly typical of the trust many Virginia families placed in their slaves. Selina took the position seriously and confronted the Federal commanding officer when the Lee’s possessions began to disappear.

In 1864, the government took possession of the estate when Mrs. Lee could not appear in person to pay property taxes. For reasons both practical and symbolic, the army then established a military cemetery on the grounds, which grew to become Arlington National Cemetery.

Among the rooms that you can see during the tour of the house are the Family Parlor, where Mary Custis and Robert E. Lee were married; the Dining Room, where Lt. Lee proposed to Mary Anna; the White Room, where the Lee children played; and the Lees’ bedroom where Robert E. Lee spent a sleepless night agonizing over his decision to remain a U.S. Army officer or follow Virginia.

I loved the large windows, fireplaces and well-worn wood floors, but my favorite place in the house was the staircase. There are two, as is common in old houses. The one that was likely the servants’ stairs was very steep and narrow, and the handrail was well worn. I happened to be alone when I was on the stairs and thought about all of the hands that had held onto that railing. It’s just an amazing experience to have the opportunity walk in the footsteps of all that history. 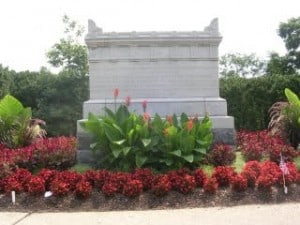 One other important memorial of interest on the grounds of Arlington House – located in the flower garden actually – is the monument to unknown Civil War dead. The tomb reads:

“Beneath this stone repose the bones of two thousand one hundred and eleven unknown soldiers gathered after the war from the fields of Bull Run and the route to the Rappahannock. Their remains could not identified but their names and deaths are recorded in the archives of their country, and its grateful citizens honor them as of their noble army of martyrs.
May they rest in peace.
September AD 1866″

Arlington House is undergoing renovations – and has been for a few years now – so I hope to go back when it is finished and the furnishings are back in the house.