After a heavy book signing schedule in April and May, and then working long hours throughout the month of June (as in 85 hours in one week) I’ve taken some time off in July to get caught up.

Last week I checked off one of the things on my summer list by visiting Arlington National Cemetery and Arlington House, the former home of General Robert E. Lee.

I have to say that no picture could capture the solemn sacredness of this military shrine. In addition to tombstones stretching as far as the eye can see, the sound of muffled drums beating as another veteran is laid to rest adds another dimension to the experience. More than once I heard the haunting music of the military band floating across the hills, followed by three rifle volleys, and then the eerie notes of “Taps.” About 6,900 burials take place at Arlington each year.

The cemetery covers 624 acres and holds the remains of more than 320,000 servicemen and women from every war and conflict in our history. In addition to the well-known Tomb of the Unknowns which is guarded by a sentinel 24 hours a day, there are the graves of some who have been overlooked by history. Johnny Clem is one of them. He was a 10-year-old drummer boy during the Civil War who attained the rank of sergeant by the age of 12.
﻿

﻿I visited Arlington on one of those very hot days and the Confederate section of the cemetery is located about as far away from the Visitor’s Center as you can get, but I made the trek on foot.

It is interesting to note that despite the fact that animosity toward the South was still very intense after the Civil War, by the end of 1901 Confederate soldiers that had been buried in Alexandria and at the Soldiers’ Home in Washington were brought together with the soldiers buried at Arlington and re-interred in the Confederate section. Among the 482 persons buried there are 46 officers, 351 enlisted men, 58 wives, 15 southern civilians, and 12 unknowns.

The Confederate dead are buried in concentric circles around the Confederate Monument, and their graves are marked with headstones that are distinct for their pointed tops. Legend attributes these pointed-top tombstones to a Confederate belief that the points would “keep Yankees from sitting on them.”

Dedicated on June 4, 1914 (Jefferson Davis’ birthday is June 4), the 32-foot monument includes on its summit, a larger-than-life figure of a woman representing the South. Her head is crowned with olive leaves, her left hand extends a laurel wreath toward the South, acknowledging the sacrifice of her fallen sons. 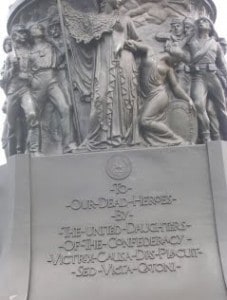 The base of the memorial features several inscriptions. On its front face are the seal of the Confederacy and a tribute by the United Daughters of the Confederacy, followed by the Latin phrase: “Victrix Causa Diis Placuit Sed Victa Caton.” This phrase means: “The Victorious Cause was Pleasing to the Gods, But the Lost Cause to Cato.” On the rear of the monument is an inscription attributed to the Reverend Randolph Harrison McKim, who was a Confederate chaplain and who served as pastor of the Epiphany Church in Washington for 32 years. It reads:

Arlington National Cemetery is a history lesson spanning more than 600 acres. In addition to the Civil War, I visited areas where rested the remains of veterans from the Revolutionary War, Spanish-American War, Battle of the Bulge, Rough Riders, The Challenger, Iran Rescue Mission, Unknown Dead of 1812, and Pan Am Flight 103.

On Wednesday I will post about my visit to Arlington House, the home of General Robert E. Lee, whose property became Arlington Cemetery.