I started the Memorial Day weekend as I try to do every year, by placing flags on Veteran’s graves at Evergreen Cemetery in Gettysburg. Buried there are veterans of every war, including many from the Civil War.

I seem to get assigned a different section every year, which is great because I always stumble across relatives who have served. This year it was my “Uncle Paul” who was my grandmother’s brother. He died when I was young so I don’t remember him, but do remember stories about him and the Civil War artifacts he collected over the years. I also placed a flag on the grave of one of my grandmother’s cousins. 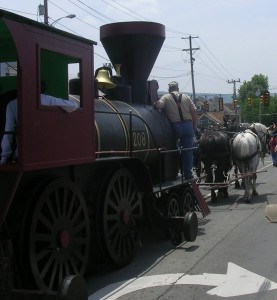 On Sunday, I traveled down to “the Valley” in Virginia to do a book signing at the Great Train Raid event in Strasburg. The Great Train Raid of 1861 is the name associated with one of the earliest Civil War operations in Virginia, which resulted in the largest capture and removal of railcars and equipment during the entire War.

By using a combination of initiative and ingenuity a small group of soldiers and civilians managed to close the Union’s most important east-west supply route for ten mouths. At the same time, they got away with 14 badly needed locomotives, 80 railroad cars and tons of valuable rails and equipment, which they hauled overland using only draft animals for power. 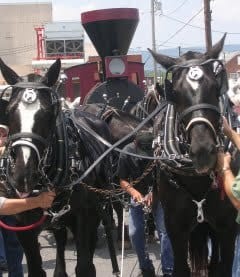 The politics of the time and the layout of the entire raid is outlined on the Great Train Raid website, so be sure to take a look.

A few thousand people gathered to watch the train, which was pulled by a six-horse team, from the Cedar Creek Battlefield, through downtown Strasburg, to the Strasburg Museum. The event included live music, demonstrations, food, and lots of fun things to do. I met so many wonderful people while signing copies of my new romantic historical fiction novel Noble Cause and my Civil War novel Shades of Gray. 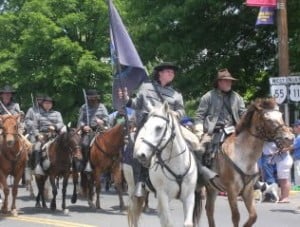 In addition to the locomotive being pulled through the town, the parade also included cavalry groups and wagons being pulled by two-horse teams. It was a very hot day, but they all seemed to make the 4.5 mile journey without any problem.

On Memorial Day I did a short book-signing session at the Gettysburg Visitor Center. It’s so nice to meet people from all over the country who want to learn more about our history. I met folks from California, Ohio, Connecticut, New Jersey, and of course, Maryland, DC, and Virginia.

I’m glad we have Memorial Day to pause and reflect on those who have sacrificed for us. It’s also a day to count our many blessings thanks to the dedicated service of those who continue to put duty to country above all else.