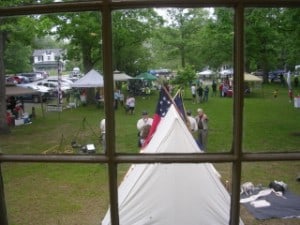 I didn’t take many photos at my book signing in Virginia on Saturday, but I sure had a great time! The event was Purcellville Heritage Day, an old-fashioned country fair that included a Civil War theme this year in commemoration of the 150th anniversary of the Civil War.

This picture is of the Confederate Civil War encampment with vendor tents in the background. It was taken through the window of the historic building where I was located, which was as “old skating rink,” complete with beautiful old, hardwood floors.

The formal name for the skating rink building is Bush Tabernacle Auditorium, named after the Temperance Bush meetings that were held on the site starting in 1877. Reformers organized the meetings as a religious temperance rally that advocated educating people on the physical and social problems associated with alcohol. The first three-day event, billed as a Grand Temperance Bush Meeting, was held on the site in August 1878, and continued each year. The owner had a large timber-framed auditorium constructed on the land in 1903 to accommodate the large crowds that attended the annual bush meetings.

The Heritage Day event on Saturday had lots of local music, antique collectors, artists, craft vendors, letterboxing, historic trolley tours through town, a farmers market, donkey rides, old fashioned games with prizes, a petting zoo, local wineries — and lots of great food (Yes, I had to try a little of everything).

The finale of the evening was a premier showing of the documentary Last Hardware Store, which features Nichols store in Purcellville. The trailer gives you an idea of what a wonderful old town Purcellville is (though it’s now surrounded by developments as DC residents move west).

Like the weather in Pennsylvania, it was cloudy and a little misty in Purcellville, but it didn’t seem to stop people from coming out. I met so many wonderful people and signed lots of copies of both Noble Cause and Shades of Gray.

Thank you Purcellville Preservation Association for putting on this wonderful event.