It was a whirlwind weekend as Confederate History Month drew to a close on Saturday.

First, I had a wonderful book signing event for my new Civil War novel Noble Cause at Pages of the Past Bookstore in Gettysburg. If you’re coming to visit Gettysburg, you have to put this store on your list of must-see’s. They have a great selection of Civil War books, military, biographies, historical fiction — and my favorite — OLD fiction.

After the signing, I walked down to Baltimore Street and watched the skirmish that was part of Gettysburg’s commemoration of the 150th anniversary of the start of the Civil War. 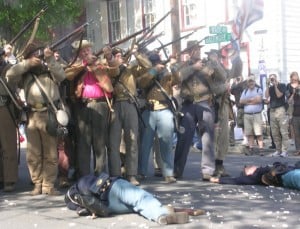 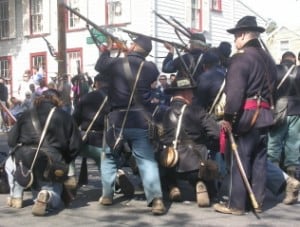 I’ve been to numerous battle re-enactments, but it was interesting to see this type of fighting up close, smell the smoke, and hear the gunfire rattling through the streets.

I hope that visitors were not too troubled by the numerous construction projects going on in Gettysburg, some of which have left the streets in disrepair. Because it’s such a small town, one small traffic tie-up generally causes the entire town to come to a standstill. I’m sure that shutting down Baltimore Street for the duration of the re-enactment didn’t help matters, but it was a worthwhile event.

I also hope people were not too disheartened by all of the hype the promoters caused by contending there was going to be a huge cannon-fire event. It wasn’t anything like they said it was going to be. (I only heard about four volleys myself, which I find a little surprising).

Many thanks to all of the re-enactors who came to Gettysburg to help educate people about our history!

To end the weekend, I put all the names of those who entered my BOOK GIVEAWAY contest during Confederate History Month into a hat and drew the winner of a signed copy of Noble Cause. The lucky winner is Myra Cole of Kentucky. Congratulations, Myra!

My next book signing is Saturday, May 7 at the Valley Mall in Hagerstown, Md., as part of Washington County’s Reading Day. Hope to see you there!