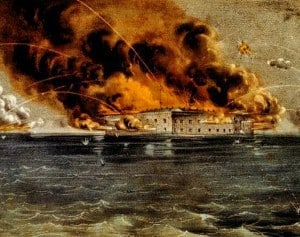 The final day of my book tour for my new historical fiction novel, Noble Cause, I went to Patriot’s Point where cannons were fired to mark the 150th anniversary of the start of the Civil War (on April 12).

During my travels in South Carolina, I was somewhat surprised to talk to people who were not aware of the Civil War’s anniversary and did not know exactly what happened at Fort Sumter. Here is a short summary of what occurred, as well as actual newspaper posts and dispatches that were sent during those fateful days in April, 1861:

The Fort Sumter saga actually began on December 20, 1860, when South Carolina was the first state to secede from the Union, claiming ownership of all federal property within state lines—including, of course, Fort Sumter. Rather than give up the fort, the outgoing administration of President Buchanan hired a merchant steamer, the “Star of the West,” to transport troops and supplies to reinforce Major Anderson who was in control of Fort Sumter.

On Jan. 9, 1861, the ship attempted to enter Charleston Harbor. Cadets from The Citadel (the South Carolina Military Academy) were stationed at Morris Island manning a battery, and they opened fire upon the merchant vessel. When guns from nearby Fort Moultrie joined in the attack, the “Star of the West” abandoned its relief mission and headed back to New York Harbor. Some historians claim the cannon fired at the Star of the West were the actual first shots of the Civil War.

From then on, rumors began to fly about the Federals coming to reinforce the fort and what would be done about it.

The Impending War.
From Charleston.
Sumter Summoned to Surrender.
Refusal of Major Anderson to Comply.

A collision is hourly expected. Northern dispatches state than an attempt will be made today to reinforce Fort Sumter in small boats, protected by sand bags, the war vessels in the meantime to protect the landing party on Morris Island. It is reported that Gen. Beauregard has demanded the evacuation of Fort Sumter.

An opening on Fort Sumter is expected every moment. The Battery is crowded with people in expectancy, and troops are pouring in. Business is suspended. The Citadel Cadets are guarding the Battery with heavy cannon. Thousands are waiting to see the attack commence. One thousand mounted men and two thousand patrols, heavily armed, are guarding the city.

Major Anderson has refused to surrender. His reply is to the effect that to do so would be inconsistent with the duty he owes to his Government.

Hundreds of persons have been waiting for hours on the wharves and other points of observation, to see the beginning of the conflict, among them a great number of ladies. The people are out on the housetops watching with feverish interest for the first signal of attack. The excitement in the city is intense. Every train brings throngs of citizens and soldiers to town. Twenty-two car loads came from Columbia tonight.

…Stirring times are at hand. The ball may open at any moment with terrible slaughter.

All negotiations for the surrender of Fort Sumter ended at 4:30 in the morning of April 12, 1861, when Confederate forces began a bombardment of the fort. Here are excerpts from the front-page story, from the April 13, 1861, issue of the New York Herald (New York, New York):

Civil war has at last begun. A terrible fight is at this moment going on between Fort Sumter and the fortifications by which it is surrounded.

And later that day:

…The excitement in the community is indescribable. With the very first boom of the gun thousands rushed from their beds to the harbor front, and all day every available place has been thronged by ladies and gentlemen, viewing the solemn spectacle through their glasses. Most of these have relatives in the several fortifications, and many a tearful eye attested the anxious affection of the mother, wife and sister, but not a murmur came from a single individual. The spirit of patriotism is as sincere as it is universal. Five thousand ladies stand ready today to respond to any sacrifice that may be required of them.
…Troops are pouring into the town by hundreds, but are held in reserve for the present, the force already on the island being ample. People are also arriving every moment on horseback, and by every other conveyance. Within an area of fifty miles, where the thunder of the artillery can be heard, the scene is magnificently terrible.

The next day, readers of the New York Herald picked up their papers and learned that Fort Sumter had surrendered–the opening battle of the Civil War had ended with a Confederate victory. A correspondent in Charleston churned out a series of rapid dispatches to keep the newspaper’s readers informed of the battle and the entire scene at the waterfront. Here are excerpts from that front-page Fort Sumter surrender story, as printed:

Major Anderson has surrendered, after hard fighting, commencing at half past four o’clock yesterday morning, and continuing until five minutes to one today.

The American flag has given place to the palmetto of South Carolina.

I thought this was one of the most interesting parts of that post. Note that when the American flag was shot away by the South Carolinians, they sent a boat over to replace it!

During the fire, when Major Anderson’s flagstaff was shot away, a boat put off from Morris Island, carrying another American flag for him to fight under – a noteworthy instance of the honor and chivalry of the South Carolina seceders, and their admiration for a brave man.

The scene in the city after the raising of the flag of truce and the surrender is indescribable – the people were perfectly wild. Men on horseback rode through the streets proclaiming the news, amid the greatest enthusiasm. On the arrival of the officers from the fort they were marched through the streets, followed by an immense crowd, hurrahing, shouting, >nd yelling with excitement.

Here are some of the dispatches that were sent:

To L.P. Walker, Secretary of War:

Major Anderson replies as follows: “I have the honor to acknowledge the receipt of your communication demanding the evacuation of this fort, and to say in reply thereto, that it is a demand with which I regret that my sense of honor, and of my obligation to my Government, prevent my compliance.”

He adds, verbally: “I will await the first shot, and if you do not batter us to pieces, we will be starved out in a few days.”

We do not desire needlessly to bombard Fort Sumter. If Major Anderson will state the time at which, as indicated by him, he will evacuate, and agree that, in the meantime, he will not use his guns against us unless ours should be employed against Fort Sumter, you are authorized thus to avoid the effusion of blood. If this, or its equivalent, be refused, reduce the fort as your judgment decides to be most practicable.
(Signed) L.P. Walker, Secretary of War

To L.P. Walker, Secretary of War:

He would not consent. I write today.
(Signed) G.T. Beauregard

I hope this gives a little insight into what was happening in Charleston in 1861. I will carry the memory of spending the 150th anniversary of the start of the Civil War in this historic city with me always.