It’s time for a post on Day 5 of my Book Tour for my historical fiction novel Noble Cause. After a relaxing day in Charleston, my niece and I were graciously invited to tour Middleton Place.

I’m not sure I can put into words the beauty and majesty of this plantation that sits on the banks of the Ashley River outside of Charleston. Middleton Place consists of 110 acres and is home to the oldest landscaped Gardens in the United States.

According to tradition, it took one hundred slaves almost a decade to complete the wide-sweeping terraces, walks, and artificial lakes to the river and marshland beyond. In addition to that stunning view, there are acres and acres of landscaped gardens that were first laid out in 1741 by Henry Middleton.

﻿﻿The Main House (c. 1705) at Middleton Place had two detached flanker houses, as was common during that time period. Unfortunately all three buildings were ransacked and torched in 1865 at the close of the Civil War.

The surviving South Flanker, originally built as a separate “gentleman’s guest quarters,” was restored and expanded to serve as the family residence after the war.  Repairs began in 1869 and included a new roof and Dutch gable ends.

Thus strengthened, the South Flanker survived Charleston’s Great Earthquake in 1886, that felled the gutted walls of the other buildings. The South Flanker continued to serve subsequent generations until becoming a House Museum in 1975, where visitors can see family furniture, portraits, silver and documents.

The picture to the right shows the actual main house that was originally three stories high. (Flankers were only two stories). In addition to being looted and burned by the 56th NY Volunteers on Feb. 22, 1865 (just two months before the war ended), it was further decimated by the earthquake of 1886.

From 1741 to 1865, this property was home to four successive generations of the Middleton family. Today it is owned by a Foundation that helps interpret the lives of the early Middletons, giving visitors a taste of plantation life in the 18th and 19th centuries. 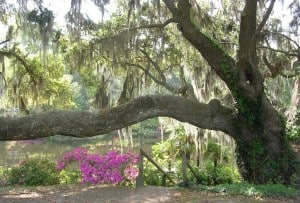 I will be putting together some video that I took while at Middleton Place later this month, but for now I wanted to post some photos of the grounds. I’m not sure that pictures do the landscape justice. They are truly breath-taking.

The gardens at Middleton Place are said to be the most authentic expression of the 18th-century formal garden ideal — a marriage between Man and Nature. Although enhanced and expanded over the years, the original framework of Henry Middleton’s plan prevails.

In 1941, the Garden Club of America cited Middleton Place as not only the oldest, but also the most important and interesting garden in America. 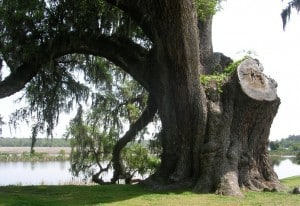 Anyone who knows me, knows how much I love old trees. When I say “old,” usually that means 200 to 300 years old. At Middleton Place, that means 600 to 700 years old. This tree, called the Middleton Tree, sits right on the Ashley River. As you can see, it recently lost a limb – which is probably about four feet in circumference. Imagine what this tree has witnessed in its lifetime.

Before I end this post, here is a list of just some of the accomplishments of the Middleton family:

I’ll be wrapping up my Civil War Book Tour tomorrow with final thoughts on spending the 150th anniversary of the Civil War in Charleston. Hope you enjoyed!