OK, it’s not really Day 3 of my book tour for my new historical fiction novel, Noble Cause. It’s Day 5. But it’s hard to keep up with touring, signing, and blogging when the sun is shining outside. Today, I’m writing about Day 3, which is the day I spent in beautiful Beaufort, S.C. 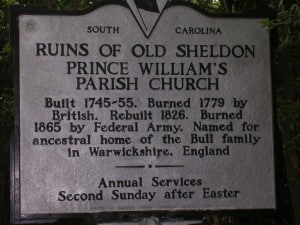 As I mentioned in an earlier blog, I made a short side-trip on my way to Beaufort to stop at the Sheldon Church ruins. From its first service in 1757 to its present peaceful setting, the church is truly a tapestry of our nation’s history.

The church was set on fire by the British during the Revolutionary War. It was then rebuilt from the remaining walls in 1826. On Jan. 14, 1865, Sherman’s troops burned the church a second time, as part of the “March to the Sea” campaign. While the walls still refused to fall, it was never to be repaired again. 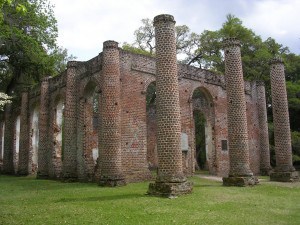 The grounds are beautiful and somber, with those beautiful brick walls and columns standing in the middle of a grove of ancient live oaks. Old tombstones dot the grounds as well.

This is one of those places that is just breath-taking, especially when you consider the history that took place here. It really gave me chills.

From the church, I continued on to my book signing in Beaufort. The City of Beaufort is celebrating its 300th birthday this year, but the history of the region dates back almost 500 years.

During the Revolutionary War, the Beaufort area had scattered fighting between Tories and Patriots. The Beaufort Region is also a staple in the history books for the American Civil War. The first meeting to draft the Ordinance of Secession (by which South Carolina led the withdrawal of the Southern states from the Union) was held at the Milton Maxey House in Beaufort, known today as the Secession House. As a result, Beaufort was an early target of the Federal forces.
﻿﻿

﻿﻿I fell in love with Beaufort, not only because of its history, but for its beautiful and quiet setting as well. The Point area, especially, is just one beautiful home after another along gorgeous tree-lined streets.

Beaufort is also known for its Gullah Culture. The Gullah are known for preserving more of their African linguistic and cultural heritage than any other African-American community in the United States. Some of the largest population of Gullahs are here in Beaufort, SC.

I’ll have to do another post after I get home on some of the msc. photos I’ve taken on my trip. Tomorrow I’ll be writing about my excursion to historic Charleston and the open-air market.