A beautiful day in southern Pennsylvania, but it was only a tease. More cold weather is expected tomorrow. Lucky it is that I will be heading to South Carolina later this week to launch my new historical fiction novel, Noble Cause, and to witness the 150th anniversary of the start of the War Between the States in the place where it all began–Charleston! 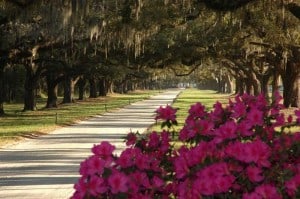 My first book signing will be on Friday, April 8, at Boone Hall Farms, which is right across from the stunning Boone Hall Plantation. Boone Hall is one of America’s oldest working, living plantations, and has continuously been growing and producing crops for more than 320 years. I can’t wait to see the tree-lined drive with the azaleas in bloom.

I visited Boone Hall many years ago, and it is one of the most beautiful places I have ever seen. The trees that line the drive were planted in 1743, and the result is a spectacular approach to the home beneath a canopy of live oaks.

Following that book signing, I will jump in my Jeep for a short road trip to Beaufort, S.C. The City of Beaufort will celebrate its 300th birthday this year, but the history of Beaufort, Port Royal, and the surrounding Sea Islands dates back almost 500 years.

I will be signing books at the Beaufort Bookstore on April 9, from 1-3 p.m. There is a lot to see in this town, but when I’m done, it will be back to Charleston to sign books at some Barnes and Nobles. On Sunday, April 10, I’m going to take in some shopping at the open air market and visit the Daughters of the Confederacy Museum.

On Monday, my niece and I have been invited to tour Middleton Place so that I can video it for my blog. It looks positively spectacular from the photos. I can’t wait to see it — the gardens should be in full bloom!

Tuesday, April 12, is the start of the 150th anniversary — the day the Confederacy fired upon Fort Sumter. I’m hoping to make it to Patriot’s Point at dawn to witness an artillery bombardment, and from there, head to Folly Island and historic Georgetown to visit more bookstores.

It will be an action-packed week, but I hope to bring it all to you through photos and video right here on my blog, so stayed tuned!