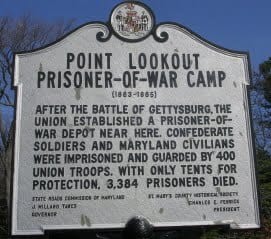 I just got back from a short trip to Southern Maryland, where I had the opportunity to visit Point Lookout at the very tip of Maryland. Located on a peninsula formed by the confluence of the Potomac River and Chesapeake Bay, the Point is a beautiful–yet somber and sad, place to visit. When standing on the tip of that peninsula and gazing out at the blue water of the bay, it’s hard to imagine the chilling and horrific events that occurred there.

As the plaque says, this area was established as a prisoner-of-war depot after the Battle of Gettysburg in 1863. Confederate soldiers and Maryland civilians were imprisoned at Point Lookout and guarded by 400 Union troops. With only tents for protection, at least 3,384 prisoners died. (This is the official government number. Others put the number of dead at substantially more thousands).

Anyone who has been to Point Lookout is probably aware of the memorial that has been placed there by the Point Lookout Prisoners of War Descendants Organization (PLPOW). The group was founded to honor the sacrifices of their ancestors and to bring attention to the true story of the inhumane treatment of prisoners at the camp.

Point Lookout was built to hold 10,000 prisoners, but at times, held more than double that number. Due to inhumane conditions as well as active persecution, thousands of prisoners died. Even though there were adequate funds to house and feed the prisoners adequately, the prisoners died from the elements, disease, starvation and indiscriminate shootings.

In 2002, The Maryland Park Service and U.S. Veterans Administration began to require all speeches and re-enactments be submitted for censoring. (Very common these days, unfortunately). Descendants were further discriminated against with a directive that prohibited the display of the Confederate Flag over the mass grave of the thousands of men who fought and died for the Confederacy. 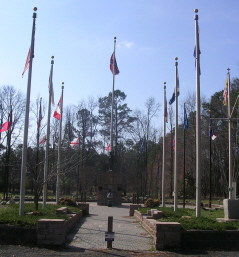 In 2003, PLPOW did a wonderful thing. It purchased land at the entrance to Point Lookout State Park and erected a memorial plaza that is free of government interference and restrictions.

As you can see from the photo, all of the Confederate flags are flying above the memorial and a plaque in front explains the history of the different flags.

Surrounding the memorial are small placards that tell the story of the horrible and horrific conditions at Point Lookout, taken from official reports and diaries. I almost stopped reading about halfway through, they are so very sad and poignant. Some tell of Yankee guards shooting indiscriminately into tents and killing prisoners; others tell of the feasts that the guards dined upon while between 12 and 15 prisoners were dying from starvation each day. 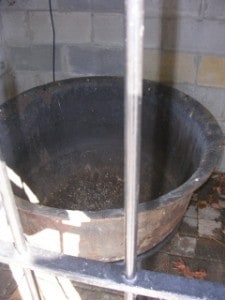 The photo to the right is a part of the Confederate memorial. It’s an iron cauldron called the “Bean Pot” from the prison camp. The plaque states that the prisoners were lucky if they found a bean in their bowl.

Point Lookout is now a state park that has camping, swimming and fishing activities. I hope all who visit there take a moment to reflect on the events that occurred there during the Civil War. It is a part of our past that is difficult to look at and  remember–and yet it should never be forgotten.