Noble Cause is here! 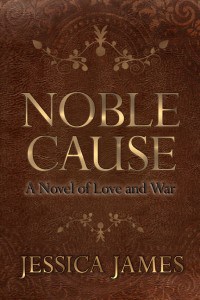 Yes, the 150th anniversary of the Civil War commemorative edition of the historical fiction novel Shades of Gray is finally here!

The new title is Noble Cause: A Novel of Love and War. It is a hardcover edition, and came about as a result of numerous romance readers requesting a more “happily ever after” ending for their beloved characters in Shades of Gray.

For those who are not yet familiar, this is the tale of Colonel Alexander Hunter, a dauntless and daring Confederate cavalry officer, who, with his band of intrepid outcasts, becomes a legend in the rolling hills of northern Virginia. Inspired by love of country and guided by a sense of duty and honor, Hunter must make a desperate choice when he discovers the woman he promised his dying brother he would protect is the Union spy he vowed to his men he would destroy.

Readers will discover the fine line between friends and enemies when the paths of these two tenacious foes cross by the fates of war and their destinies become entwined forever.

I’m very excited about this novel and had a great time launching it in historic Charleston, S.C. in April during the 150th anniversary of the Civil War commemoration events. I was even in Charleston on the same day as the bombardment of Fort Sumter began 150 years ago!

The next few years are going to be a wonderful time to learn more about the War Between the States. I hope everyone takes advantage of the events their state is planning. For information, I recommend Civil War News and Civil War Traveler.