A trip into the past

Well, I promised some more photos from Hollywood Cemetery in Richmond, so here they are.

You have to appreciate the beautiful craftsmanship on some of these monuments and wonder about the amount of time it must have taken to create them. I am always drawn to those that include figures and I thought this one to the right was especially beautiful.

As I said in my earlier post, this cemetery encompasses 135 acres that traverse over rolling hills and through large stretches of stately trees. It is easy to get lost once you’ve parked your car and start walking around, and it’s easy to lose track of time as well! 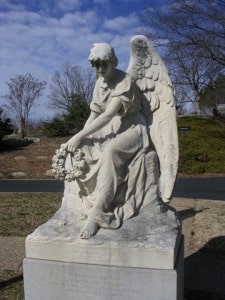 This beautiful angel is dedicated to the daughter of Jefferson Davis.

There were many other monuments with beautiful inscriptions. One of the most prominent of those was an immense, solid granite memorial that stood about 20 feet high. There is an inscription on all four sides, but I could only make out the words on two of them.

One side simply reads:
A Husband’s Tribute

The other side reads:
To the memory of Evaline Augusta Fuqua
Born Jan. 1, 1829
Died May 5, 1851
Wife of M.H. Nace
A faithful and devoted wife
A fond and affectionate mother
A true friend
And an exemplary Christian

Quite a tribute to a wife and mother who was only 22 years old when she died. 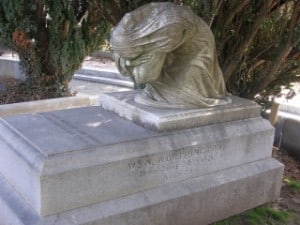 Well, I saved the best for last–or maybe it’s more like I saved the most heartbreaking for last. This particular monument I remembered from visiting Hollywood Cemetery years ago while doing research for my historical fiction novel Shades of Gray. I knew the general area it was located in, but still had trouble finding it.

It may be hard to see that it’s a woman kneeling over with her head in her arms. The simple inscription on the top of the monument is:

I shall go to him
But he shall not return to me.

This is the grave of W. N. Worthington (William Nicholas Worthington). He was 29 at the time of his death and a former Confederate staff officer. In doing more research I found that he served in the 4th Virginia cavalry, but died in Toledo, Ohio.

I’m going to do one more post on Hollywood Cemetery, and that will be to talk about the grave site I found for Frank Rahm, one of Mosby’s Rangers. I possess Rahm’s field desk and other Civil War items, and have been trying to trace his family tree.