I have returned from two of the most wonderful days in my entire life. Really! Looking back on it now, I feel like I was in a time warp, or maybe I dreamed the whole thing. It was just too good to be true.

It’s funny since the whole thing was kind of a last-minute trip. I received the Mosby Heritage Area Association newsletter, which announced an event at Welbourne (now a B&B) and the neighboring estate, Crednal. (Yes, most houses have names in this part of Virginia).

Since I’ve always wanted to stay at Welbourne — Gen. J.E.B. Stuart and Col. John Mosby visited there — I booked a room. (For those of you who don’t know, Col. Mosby is the Confederate officer that the main character in my historical fiction novel Shades of Gray is patterned after).

I knew it was going to be a good trip when the innkeeper called me while I was still on the road to tell me how to get to my room in case she didn’t see me when I arrived: Turn right at the front door, and go straight through the library…

Straight through the library? Already starting to sound like heaven! (It only gets better).

When I arrived at Welbourne, I happened to run into Miss Sherry, the innkeeper. After walking through the library and showing me my room, (picture me trying to control myself just walking through a library… an old library, with old books…), she told me I might want to close my front door since there were soldiers everywhere. (I guess she thought I would think that a bad thing).Sure enough, five minutes later the hounds started barking and I found four Confederate cavalrymen right outside my door. They were actually heading for the water tubs for the horses—which just happened to be right outside my room. (Thank you very much).

To back up a little bit, I haven’t been to this part of Virginia for years… since doing research for Shades of Gray. Back then, I would drive around for hours on the dirt roads, comparing landmarks with first-hand accounts of the war to try to find the locations of actual events. One place that eluded me for years was Heartland, which was Col. Mosby’s headquarters. It was burned to the ground by the Yankees, but the chimney and foundation remained.

I did eventually find it in the middle of a cow pasture 10 years ago, but back then there were signs of development. I decided to look for it again over the weekend, fearing all along that it would be the site of a townhouse. As it turned out, the landscape has changed quite a bit –more houses replacing the farmland — but Heartland is now part of a horse farm with friendly owners who allowed me take photos.

I also re-visited the Hathaway house, which is where Mosby was almost caught in bed by the Yankees. He slipped out the window and into the limbs of a walnut tree and was not discovered. As you can see, the tree remains. The limb to the window where he was staying, however, is gone.

I probably went a little overboard with photos of stone walls on this trip, but unless you’ve been to this part of Virginia, you can’t begin to understand the miles and miles and miles of stone walls. Those who have read Shades of Gray, know there is a scene in which a stone wall plays a role, and there are many accounts during the war in which stone walls either saved someone – or resulted in their capture. 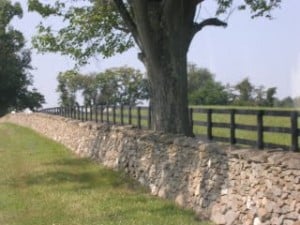 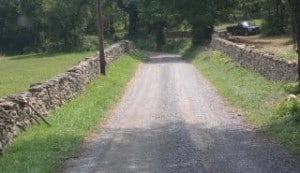 You get the idea. They are a beautiful part of the landscape and make this little piece of the country unique.

Another unique thing about Virginia is its dirt roads. I try to plan all my trips without going on a paved road – which is not too difficult to do. (I laughed when I saw a sign that said “one lane bridge ahead.” That means they consider what I was driving on to be two lanes)? Here is a photo of Rt. 743, which is the road to Welbourne. (Yes, it’s a ROAD, not a farm lane). When I was leaving, I passed a truck on that road. I had to stop with my two right wheels climbing up a bank. He likewise had his two wheels up the opposite bank and we inched by each other. As you can see, it is impossible to see what is on the other side of the hill, and most of the roads wind around with lots of turns. It’s great fun!

OK. Back to Welbourne. I wish I could do justice to this jewel, but there are no words to describe it or the wonderful owners. Welbourne is part of a 520-acre estate that was the home of Col. Richard Henry Dulany (who is the great-great-grandfather of the current innkeeper Nat Morison). Nat is the eighth generation of the same family to own the property.

The main house dates back to 1770, with additions as late as the 1870s. Col. Dulany founded the nation’s oldest foxhunting club and the oldest horse show. As I said before, visitors during the Civil War included Jeb Stuart and John S. Mosby. In the 1930’s F. Scott Fitzgerald and Thomas Wolfe stayed at Welbourne. Both writers published stories using the house as the setting.

I spent a lot of time in the library – needless to say – and now have an entire list of out of print books that I want to buy. I was surprised, though, at how many of the titles I do have — with the themes of Civil War, Virginia and the Confederacy, I share the same tastes as the Morisons. 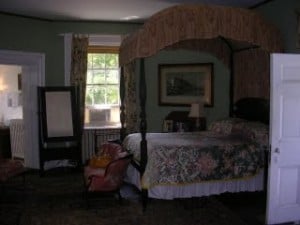 Here is one side of my bedroom, with the door on the right opening to the front. That is only half the room. The other side had an antique table, antique writing desk, sitting chair, and huge armoire. I felt like I had stepped back in time.

The reason for my visit was a wonderful re-enactment, which was sponsored by the Mosby Heritage Area Association, and put on by the Valley Light group out of Winchester (THE most realistic looking re-enactment group I have ever seen). 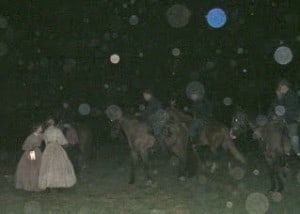 The scenario featured a group of Yankees riding up to Welbourne and taking a young boy prisoner in retaliation for Mosby’s raids. The women you see are trying to get their child back. At the end of the night, the Confederates ride in and get the boy back, returning him safely into the arms of his mother.

I assumed the poor quality of the photo was from dust, but this is the only photo in which the “orbs” appear. You decide.

This post does not begin to cover everything I did over the weekend, but I hope it gives you a taste. Perhaps the most memorable part was Nat, the owner of Welbourne, taking the time to share two of his unbelievable historic treasures with me. I could not believe my eyes!

I’m usually anxious to get home after being away — but on this trip –I somehow felt like I was already there.