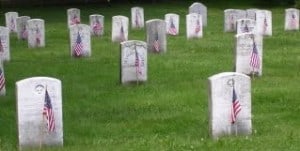 Don’t know why it’s taken me more than a week to write about my Memorial Day experiences, but I’m finally getting around to it. I thought I’d share because it was such an unusual set of circumstances that led to the discovery of some ancestors who fought in the Civil War.

First of all, the plan for the day was to stain the backyard deck. However, since the day turned out to be extremely hot and steamy, we decided instead to drive around the battlefield and act like tourists.

With no real plan in mind, we ended up at the National Cemetery, where the above photo was taken. Walking along the pathway around the cemetery, I suddenly turned into the burial area to read some of the markers. There, in the first row, was a tombstone with the last name of my boyfriend — and the soldier had served in a New York regiment, where my boyfriend is from. Of all of the thousands of graves in that cemetery, it seemed a little odd that we would stumble across that one, but the coincidences did not stop there.

We then drove over to the adjoining Evergreen Cemetery because I am working on a magazine article on Jennie Wade, the only civilian killed during the Battle of Gettysburg. I wanted to take a picture of her monument to go with the story, and look for her fiance’s tombstone as well. (He was wounded and died on July 12 – she on July 3).

After getting that picture, we drove around the cemetery a little, and wouldn’t you know, I spotted a tombstone with MY last name, along with a marker that showed this soldier had fought from 1861-1865. What makes this even stranger is that I have helped place flags on veterans’ graves in this cemetery for a couple of years – but had never done this particular section.

After attending the wonderful Gettysburg Memorial Day parade, we rushed home and I hopped on ancestry.com. There I found that the soldier at Evergreen Cemetery was a great-great uncle. I also discovered that my great-great grandfather fought briefly with the 21st Pa. Cavalry, a fact that had never been passed down.

I always get asked the question at book signings if I had a relative in the war, and I used to just shrug my shoulders and tell them I wasn’t sure. Now, after this memorable Memorial Day, I can, ‘yes.’