I had a great time signing copies of my Civil War novel, Shades of Gray, in Aldie, Va. on Saturday during the village’s bicentennial celebration. 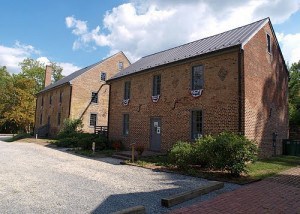 The best part was getting to sit right in front of the historic Aldie Mill which was used to supply grain to horses and soldiers by both the Confederate and Union armies during the Civil War. Built in 1807, the mill is located in Loudoun County, along U.S. Rt. 50 (John Mosby Highway).

The mill is one of the oldest gristmills still capable of grinding grain in Virginia. It was built during the presidency of Thomas Jefferson and features tandem water wheels. If you are ever in this part of Virginia, stop by and walk around the grounds. The mill is open on weekends throughout the summer.

The mill also has many links to the “Gray Ghost of the Confederacy,” John Singleton Mosby. He surprised Union Cavalrymen there on March 2, 1863. Although the Union forces outnumbered Mosby’s men by 3 to 1, he defeated them soundly. Some Union soldiers ran and hid in the mill’s flour bins when they saw Mosby coming, and when captured, came out looking like snowmen.

Another story that is one of my favorites, is the time that Mosby lost control of his horse in front of the Aldie Mill. The Confederate cavalryman was being taken at a full gallop across the bridge toward a line of Union cavalry. In an effort to stop the horse, one of his men took off after him, riding up beside him to grab the bridle. The sight of these two horses galloping at a mad rush toward them, made the Union troops turn around and run.

I have another book signing this Saturday at the National Park Service Visitor Center and Museum in Gettysburg. Please stop by and say hello if you’re in the area!