A Christmas tradition from the past 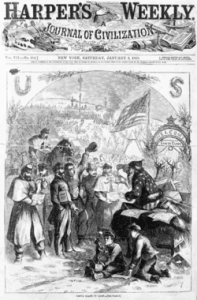 As an historical fiction author, I love reading about old traditions. So when I ran across an article about Belsnickling – a Christmas Eve tradition that was once a part of the Pennsylvania Dutch heritage, I thought I’d share it.

Never heard of it? Me neither. But according to the article, the custom involved the visit of a single individual, the Belsnickel, dressed in rather bizarre, unkempt, often frightening attire. The person would be completely disguised with a soot-blackened face and carried a sack with treats – as well as a switch or whip, bells and chains. Often the Belsnickel was a relative or friend of the family being visited and knew quite a bit about the behavior of the children. A rap on the window with the switch or a rattle of the bells signaled the Belsnickel’s arrival after dark.

Eventually, the Belsnickel would remove his costume and everyone would enjoy a party — often with a little too much hard cider. Belsnickeling was actually banned in some communities.

This tradition was common during the 19th century and early part of the 20th century in York and Lancaster counties in Pennsylvania as well as near Philadelphia and down into the Shenandoah Valley of Virginia.

The origins of the Belsnickel go back many centuries in Europe to the Feast of St. Nicolas. St. Nickolas was a gift-giver who was accompanied by a helper known as Belsnickel or Pelznickel who dressed in furs.

Interesting to see how traditions in different areas have evolved and changed over the years. No matter what traditions you and your family share, I hope you have a very Merry Christmas!