Taking a step back in time in Gettysburg

I intended to write this post much earlier today, but my dog found something really smelly to roll in this morning so I had to throw her in the tub for a bath – and then clean the entire bathroom. (Still can’t get that smell out of my nose).

Anyway, I had a great time at the book signing on Saturday at the Gettysburg Museum and Visitor Center bookstore. I had no idea what to expect, but found that I was signing with about 10 other authors – Jeff Shaara and Robert J. Trout among them. I admire both authors (Jeff is fiction and Robert nonfiction). The bookstore does not carry very much in the way of historical fiction so I was honored to be in such good company on Saturday. I also got to chat with artist Keith Rocco, who has a new book of his artwork. Keith paints all types of war art and especially enjoys the Napoleonic era.

For those of you who wished to see photos of the Remembrance Day parade, I’ll have you know that I walked about a half mile through (soggy) fields in heels in order to grant your request. My book signing for Shades of Gray ended at 1 p.m., which was the start time of the parade, but it still hadn’t arrived on Steinwehr Avenue by the time I drove as close as I could get, parked, and walked. 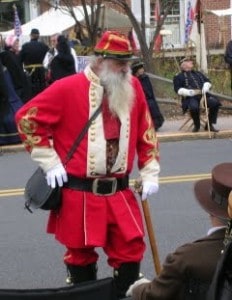 However, a large crowd had already gathered, including a Civil War era Santa Claus. He entertained all those who lined the sidewalk before the start of the parade, and posed for lots and lots of pictures. I made an effort to walk even further than necessary so I would not have the Golden Arches in any of my shots. Unfortunately, I still had the modern intrusion of power lines to deal with, but I could not bring my weary feet to walk up to Baltimore Street for the better shot. (Sorry!) If anyone reading this ever goes to this event, the best place to stand is at the “Y” of Steinwehr Avenue and Baltimore Street. That way you you can see the hundreds and hundreds of troops as they crest the hill, disappear, and then reappear. 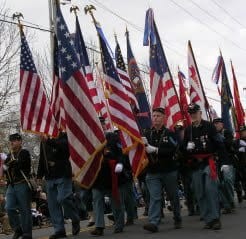 For those of you who have never heard of Remembrance Day, it is the anniversary of Lincoln’s Gettysburg Address which was given on Nov. 19, 1863 during the dedication of the National Cemetery. Every year on that date and the weekend following, Gettysburg swells by a few thousand people – most of whom are dressed in period attire. No matter what time of the day or night you drive through town, you will find Civil War era couples window shopping or entire regiments marching down the road. It’s so commonplace around here that we don’t even bat an eye – but I guess it may seem strange to newcomers. 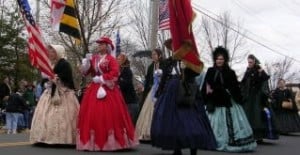 To give you an idea how many troops and civilians march in the parade, I started back to my car at almost 2:30 (the parade started at 1 p.m.), and the Confederates hadn’t marched by yet. The parade is sponsored by the Sons of Union Veterans so always starts with the Union side. I really wanted to balance out my photos with some Confederates, but I had consumed too much water at my book signing and really had to go (literally). 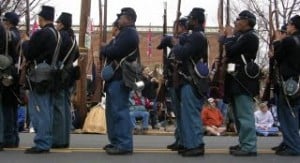 I did get a photo of a great looking 54th Mass. Regiment. This is the famous regiment whose exploits were featured in the movie Glory. They really looked authentic. Great impression!

I hope these few photos give you taste of the little town of Gettysburg during one of the best events of the year. On Saturday night there were 3,500 candles burning in the National Cemetery for the soldiers who are buried there. Unfortunately I had to work or would have taken some photos.

Next year I’m going to make sure I leave that evening free!