As I scramble around trying to get ready for my Shades of Gray book signing on Saturday, it occurred to me that people in other towns across the country may not realize what a special week this is.

To some, Nov. 19 may just be a day that falls the week before Thanksgiving – but for those who live in Gettysburg, it is so much more! You see, on the evening of Nov. 18, 1863, President Abraham Lincoln arrived by train in Gettysburg. This Nov. 19, marks the 146th anniversary of his immortal Gettysburg Address.

In addition to the ceremonies that take place on the 19th, the Saturday that falls closest to that date is traditionally celebrated as Remembrance Day – a time to pay homage to those brave men and women who gave the ultimate sacrifice at Gettysburg and other battlefields. 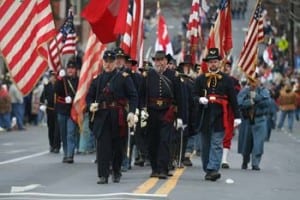 This Saturday the festivities include the Remembrance Day Parade sponsored by the Sons of Union Veterans. The parade features military bands, re-enactment units and those who portray civilians during the Civil War era. It is a one-of-a-kind event that is really a sight to behold. The parade route takes the participants down Baltimore Street where hundreds of re-enactors who are not in the parade watch from the sidewalks. Navigating said sidewalks around hoop skirts adds to the atmosphere, as do the hundreds of regimental flags waving in the air and the sound of patriotic tunes floating in the breeze.

As evening falls, Cemetery Hill will be aglow with 3,500 candles, one for each soldier who lies in the Soldiers National Cemetery that President Lincoln dedicated on Nov. 19, 1863.

If you live anywhere near Gettysburg, it’s worth making a day trip. Don’t forget to stop by the National Park Service Visitor Center on Saturday to say hello at my book signing.