Waterford’s past makes it special

Despite having a sore throat, I had a nice time at the Waterford Homes Tour and Crafts Exhibit on Friday and had a very successful book signing of my Civil War novel Shades of Gray to boot. 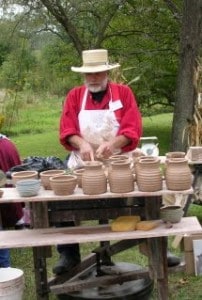 Anyone within 100 miles of Waterford, Va., located in northern Virginia, really ought to consider attending this “teaching fair” for eighteenth and nineteenth century crafts. Throughout the town, craftsmen demonstrate their skills and allow attendees to try their hand as well.

I could not begin to list all the different demonstrations, but they included everything from soap and candle making, t0 weaving on antique looms, carving bowls from green wood, making shoes and tanning animal hides.

As I wrote last year after this event, Waterford itself is a gem from the past. Founded in 1733 by Amos Janney, a Quaker from Pennsylvania, the settlement of Waterford grew and thrived around Janney’s Mill.

In the nineteenth century, Waterford was unique because it had a thriving antebellum free black community. During the Civil War, the Quaker population supported the Union, an extremely unpopular stand in Loudoun County — and Virginia. Waterford was harassed by Union forces because of its location and by the Confederate forces because of its beliefs. As a result, miller Samuel Means formed the Independent Loudoun Rangers, the only organized troop in Virginia to fight for the Union.

Of course, this all ties in with Confederate Colonel John Mosby, the inspiration for the main character in my historical fiction novel. Mosby’s Rangers defeated Means, and were also responsible for a lot of the harassment of the Quaker population in Waterford. 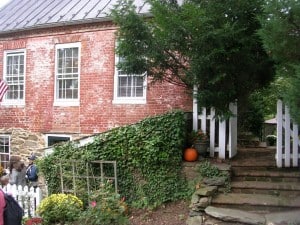 The open house tours are another part of the allure of the Waterford Fair. The James Moore House (left) was built in 1805, and was recently featured on “If Walls Could Talk.” On the street level, the original kitchen has brick floors, a log-beamed ceiling, and a walk-in fireplace with a bake oven and cooking crane.

Strolling this quaint village, it’s easy to envision it just as it was 200 years ago — thanks, in part, to this historic event. This was the 66th year for the Waterford Homes Tour and Crafts Exhibit, with proceeds going to the care of 13 buildings and preservation of 195 acres of open space.