Taking a step back in time with sealing wax 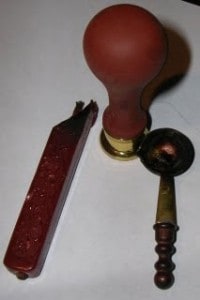 Being an historical fiction author, I enjoy doing things the old-fashioned way (maybe that’s why I haven’t caught on to text messaging yet). Pictured at right is my wax seal set – a wax candle, “J” stamp and spoon.

I bought the set from an estate auction because I still love sending handwritten cards and notes. Also, I’m the type of person who loves to experience things – not just read about them, so I’ve been wanting to experiment with this process for a long time. What I found is that it’s harder than it looks! Getting the right amount of wax on the envelope (without dripping it all over the place), is hard enough, but it also has to be done relatively fast – or the wax will harden before it is stamped. 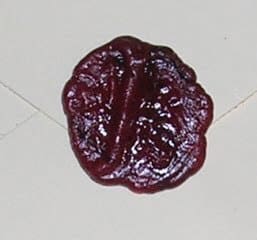 As you can see, I didn’t get quite enough wax on this one – the bottom part of the “J” is missing. It’s also interesting how much the wax candle smokes (maybe I’m doing it wrong?), and how messy the whole exercise is. When you read about someone sealing an envelope with wax, it seems to take only a few seconds – not so!

To give a little background on wax seals, they were used as a stamp of authenticity, just as a signature is accepted in the world today. The sealing wax was used to “seal” the letters or envelopes.

During the early to mid 19th century the use of wax wafers became popular in less formal correspondence. (I do not have the wafers – I have a wax candle). Often times people would imprint their sealing wax with initials, coat of arms, or other insignia as their personal mark on the sealing wax. Some even had signet rings which only they owned to verify their stamp.

With the onset of gummed envelopes, however, sealing wax and wafers eventually took a brief repose. It began to gain acceptance and popularity again, especially in America, in the 1880s and 1890s.

Interesting etiquette of sealing wax use

1840’s
It showed a lack of respect if you used a wafer to seal your envelope.
Men usually used red.
Ladies used gilt, rose, and other colors.
When in mourning you used black seals.
Using red sealing wax when writing to someone in mourning was considered rudeness or ignorance.
Large seals were considered bad taste.
A small letter gets one seal, a larger letter two.
If it contains important paper or documents it should receive three or more, according to the size of envelope.
When not using an envelope and the third part of the letter is written upon you would have left a small blank space where the seal was to be put so as to not cover over any words of the letter.
When staying overnight, and so as to not trouble your hostess, always carry a well furnished paper-case, pens, pencil, india-rubber, wafers, sealing-wax, and seals.

1850s
Do not use motto seals unless writing to a member of your own family, or to an intimate friend.
For common service, (and particularly for letters of business,) a plain seal, with simply your initials, is best.
For a note always use a very small seal.

1870s
Sealing wax went out of fashion. {However, it was still being used by some}

Mix whole together and melt over a very slow fire. Pour it on a thick smooth glass, or any other smooth surface and make it into 3, 6 or 10 cent sticks. To stamp it, it should be re-warmed, which will give it the gloss.

Etiquette and Recipe from www.victorianpassage.com