Making time for the important things

It’s been at least three years since I’ve visited my college friend – probably more like four. We keep in touch the usual way – an email now and then, sometimes a phone call. You know how it is, you’d like to visit, but there just doesn’t seem to be a spare weekend anywhere on the calendar.

When I got an email two weeks ago telling me that her mother was losing weight, I responded by sending my best wishes and telling her to say hello to her mom for me.

Last Tuesday I received another email. Her mother had been diagnosed with cancer the preceding Thursday and passed away on Sunday. Suddenly, time and the silly things on my calendar were no longer obstacles. I switched hours with a co-worker, packed my bag, and headed to West Virginia.

I found the funeral home and time of the service on the Internet, so my friend didn’t know I was coming. During the three and a half hour drive there, I had a lot of time to think – about life, about friendship, about how LONG ago it was that I had graduated from college and traveled these same roads. 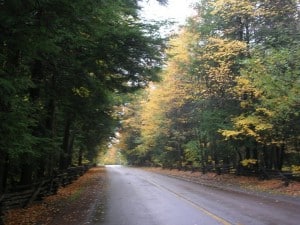 Not much had changed really. The two-lane road was now four – but the mountains rolling up high before me were the same as I remembered. The vistas from the top were still breathtaking, the mist in the valleys and the vibrant hues of the trees seemed to be showing off autumn’s glory. The short-cut route I took meant I had to drive slowly along a winding road by a lake. I felt like God was talking to me – showing me what I’ve been missing by losing sight of what’s important.

At the gathering to celebrate my friend’s mother’s life, I saw a few old friends and a number of acquaintances I had met only once or twice during my once-frequent visits to West Virginia. We caught up on each other’s lives, laughed about the old times, and talked about how the years have flown.

Most of all we talked about time – about never having enough it, and how important it is to use it wisely. I still haven’t figured out why it takes death to open our eyes to that. But hopefully, if you’re reading this, you’ll think twice about the order of importance of things on your to-do list today.