Proud to be an American! 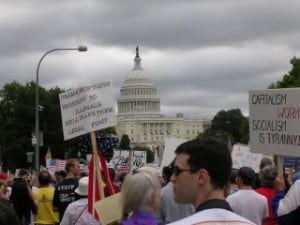 I was joined by a couple hundred thousand of the country’s greatest American’s today in Washington,D.C.

For those of you who watch ABC, NBC, CBS, or MSNBC and therefore didn’t hear about it – the march on Washington was called the 912 Project. It was intended to get the country united, like it was back on Sept. 12 of 2001.

From what I saw, people were very united. It was a peaceful event that showcased how truly great our country is.